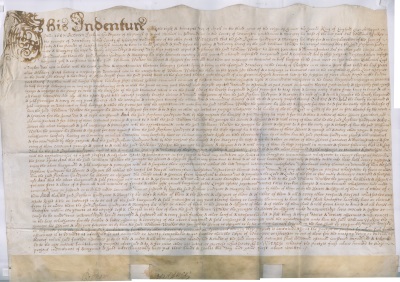 This Indenture made 28th April 1687 made between:

All that one Messuage or Tenement or Half Burgage wherein Nathaniel Layt doth now inhabit with the Court, Garden and Appurtenances thereto belonging situated lying and being in Tewkesbury in or near a street called the High Street alias the Oldbury Street between
The Messuage or Tenement now in the occupation of William Walker the elder on the North Side
The Messuage or Tenement now in the occupation of John Lane joyner on the South Side
And extendeth itself in length from the street on the forepart unto the land of Sir Francis Russell baronet and now in possession of the Poor Almspeople on the hinder part 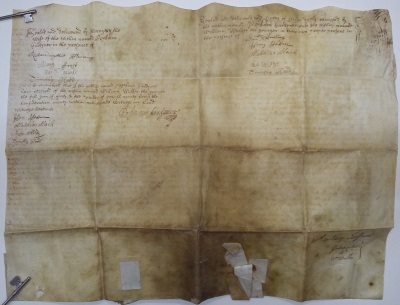 Together with all the houses, shops, sollars etc etc to the herein bargained Messuage or Tenement or Half Burgage belonging or appertaining thereunto – Particularly and Especially – Free ingress, egress regress at all times to the Pump or Well situate in the backside of the Tenement on the South Side of the hereby bargained and sold premises to take, bear and carry away water from time to time and at all times hereafter

And the Reversion and Reversions and the Remainder and Remainders Rents, Issues and Yearly Profits

To Have and to Hold the said Messuage, Tenement or Half Burgage with the appurtenances unto the said William Walker the younger his heirs and assigns forever – to be holden of the Chief Lord or Lords of the fee or fees thereof by the rents and services for the same due and of right accustomed