Tewkesbury is a living museum with more than five hundred years of architecture, and was listed by the Council of British Archaeology as one of fifty-one historic towns which are ‘so splendid and so precious that the ultimate responsibility for them should be of national concern’. It was an important market town situated at the confluence of the Rivers Severn and Avon. During the 18th. century it was a coaching centre, although it was not until 1826 that the ferries crossing the Severn were replaced by a bridge.

The Tudor House Hotel, once called the Old House, was built in 1546, and next to the Abbey it is historically one of the town's most important buildings.

The original 16th. century timber building was refronted in brick at the beginning of the 18th. century. The lovely rainwater heads (1701) date from this period. In 1897, again in response to fashion, the Victorians refronted the building with mock-timbering. On the right of the building is the charming stone gateway leading to one of the few remaining English courtyards enclosed with a high wall mostly consisting of the original pinkish orange bricks. Most noteworthy is the lead water-butt of 1747 standing next to the heavy oak side door with its battle axe scars made by Jacobite rioters on the Coronation of King George I in 1714.

Mrs. Dinah Craik, the author, in her book 'John Halifax, Gentleman', published 1857, featured Ursula March as living in the Tudor House. She refers to 'the Mayor's House - with its steps and portico and 14 windows'. Those windows still look out onto the High Street. There is a pleasing memorial to Mrs. Craik in the Abbey.

John Moore (born 1907), a renowned local author, lived here as a child and described it in 'Portrait of Elmhury' as "the loveliest house in Elmbury". He would have sat on the window seats looking through the leaded diamond panes at the Street children playing Hoops, Marbles, Conkers, Tipcat, Tops and Hopscotch. The Tewkesbury Civic Society was founded here in 1965; John Moore was the President until he died in 1967. The Society, in July 1983, subscribed to a plaque in his memory which may be seen on the front of the building. 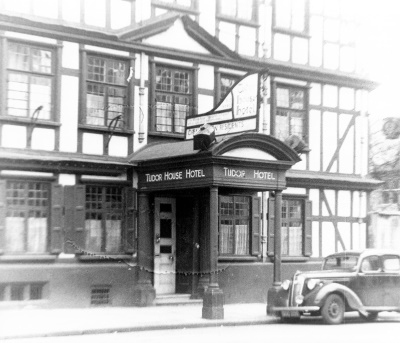 Let us enter the building up the Grand steps into the cosily dark gleaming oak-walled hall - now the reception area. The first room on the left was the Mayor's Parlour in the 17th. century. It has beautiful linenfold panelling, an open fireplace and a Priest hole. There, King Charles II, crowned in Scotland, but known as the Prince of Wales in England, was said to have hidden after the Battle of Worcester (1651). There was a splendid carved Royal Coat of Arms with James I medallion above the oak mantelpiece.

When no longer the Mayor's Parlour it was the front sitting room of the house, becoming a dining room in the 1900's. Tudor House became an hotel in 1926. The unique James I carving was sold in the late twenties to an American antique dealer for a very high price! Where in America is it now?

We continue through the hall hut before going up the fine Queen Anne staircase look through the Court Room door with its archway of oak voussoirs to the magnificent panelled James I Court of Justice. No added decorations are needed to enhance this lovely room.

Turning left on reaching the first floor, this was once one huge room where, on returning from Pennsylvania in 1712, the Pilgrim Father Rev. Samuel Jones founded the Academy for Dissenters (men who were not members of the Church of England) who were barred from the universities. Samuel Jones died aged 38 in 1719. After his death the Academy was removed to Carmarthen. The room used by the Academy has since been divided into several rooms, the end one still retaining the old fireplace with heating side ovens on its original site. It is now used as a residents' lounge but the house was recorded as a small girls' boarding school in the censuses of 1841 and 1881.

At the end of this floor, when we reach the southern end of the house, is the imposing Jacobean staircase with original wattle-work at the base. This wattle panel would have been daubed with a mixture of clay, dung and chopped straw, well mixed and as dry as possible (to avoid excessive shrinkage), then if properly maintained it would last indefinitely - as in this case from the beginning of the 17th. century.

The third floor is a joy with beams and tiny casement windows in the bedrooms. Now let us return to the Adam Room with its four-poster bed. The big bow window which still has some of the earliest curved glass looks out onto the Mill Avon, the gardens, the wide semi-circular stone steps and the well said to be an entrance to the Monks' passage. The weathered bricks on the South wall and the old red sandstone wall alongside the Gazebo complete the picture.

We now descend and pay a fleeting visit to the Gazebo neglected for many years and restored by Mr. David Wild, the proprietor from 1983 to 1990, an ideal setting for a holiday. The bedroom is remarkable with its Adam fireplace, its ancient sparkling marble and the Fleur-de-Lys alabaster ceiling. Leaving the Gazebo and walking into Red Lane (1542) aptly named from the colour of the old red sand.stone, we see the buttresses below and part coping of the walls next to Clarke's Alley (1842).

This is just a taste of the Tudor House Hotel's history; this old house also has its ghosts, but that is another story