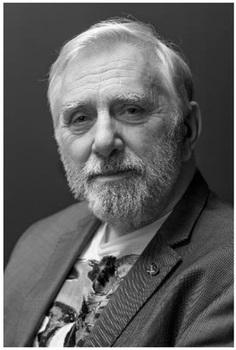 We have learned the very sad news that John passed away in the Sydney Adventist Hospital in Sydney on Thursday, 13th October at the age of 76. He had been in hospital for almost nine weeks and his initial triple heart bypass surgery went very well, but then he developed other complications as time went on including kidney and breathing problems. John’s funeral was held on 27th October 2022 and Margaret was joined by her brother, two of his daughters, one of his granddaughters and many of their Australian friends.

John and Margaret met in 1970 and were married in 1975 in Bishop’s Cleeve, I did not realize that they lived in England for about 15 years and then came to Margaret’s home country - Australia - in 1990. When they lived in England, they visited Tewkesbury whenever they could – and she fell in love with the town too. John’s special feelings for it emerge from the book, “Green and Pleasant” which he published in 2020. To Margaret, it was titled from ‘Tewkesbury with Love’ and it is one of “her most treasured possessions”.

During lockdown the Prior’s Park History Group met up with John on zoom and we learned more about his Priors Park childhood. John’s father worked with the RAF fitting out “Air Sea Rescue” boats at Lower Lode after they had been built by Robinsons’ in Tewkesbury. He subsequently worked for Dowty Rotol. [Stephen] John was born on 21 March 1946 in Cheltenham but was christened in the Abbey where his parents had been married: ‘they were spliced, and I was splashed in the Abbey’ as John recalled.

His parents were “very proud of their bright, smart little boy and were devastated when a childhood accident led to him being diagnosed with epilepsy at the age of about five. They were determined that he should lead as normal a life as possible and made sure that he did, attending grammar school in Cheltenham, later followed by a period of working in industry before enrolling in a Materials Science degree at Bradford University as a mature student”. John was very proud of his Prior’s Park Prefab, especially as it was made from similar materials to those used to build war aircraft. His boyhood friend was Nicholas (Nicky) Price. 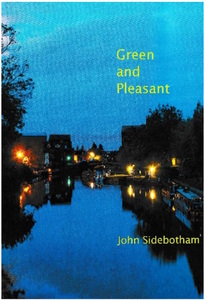 I was wrong in believing that John was a 1950s “£10 pom”. He and Margaret lived in both Southampton and Durham before moving to Stourbridge. Their final move was in 1990 to settle in a leafy suburb north of Sydney.

John’s last visit to Tewkesbury was my first meeting with him in 2017 when we were able to work together to ensure that his great uncle, Harry Waylen, who died of TB after service in Salonica in 1917, had a formal CWGC headstone as he laid to rest in Tewkesbury’s Cemetery in the WWI section. His early childhood, before Priors Park, had been spent living in the Waylen family home of 7 Chance Street. John was delighted that pupils from Queen Margaret’s School participated in the service and he was joined by his friend, Nicholas Price. We then adjourned for a ceremony in the British Legion, then in Church Street. 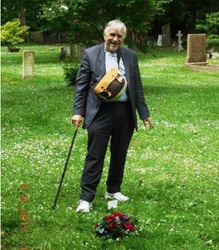 John presides over the reburial
of his great uncle,
Harry Waylen in 2017
John presides over the reburial
of his great uncle,
Harry Waylen in 2017Click Image
to Expand
John had hoped to make one more visit to Tewkesbury - possibly with several of his Sydney Camera Club friends - in 2023, but sadly this was not to be. There is one more thing we look forward to achieving on John’s behalf. In our Zoom meetings, he made it clear that how historically important was the Ironbridge, across which generations of Prior’s Park residents had accessed the town on foot and by bicycle. That was recenty closed for repairs and, as I wrote this obituary, our County Councillor has just informed me that the bridge will soon be opened. When the day returns, that residents can once again use this historic bridge, we shall send the glad tidings to Margaret in Sydney. Margaret’s supplied her email address and, using it, she would welcome hearing from John’s English friends.