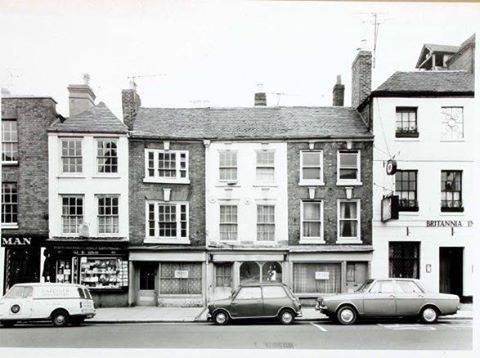 The site was demolished around 1970 and the new building was built on the site of the houses in these documents and became Lipton's Supermarket. Afterwards the site was split and two shops (Freeman Hardy & Willis shoes and Peacocks) were sited there. Today (2019) it is “Shoezone” and “Coffee#1”

The Property which is no. 27 High Street today begins with the Deed of 1726 but it refers to a mortgage of 1717 – when Nicholas Allen and Isabella his wife borrow £30 from Hopewell Hayward of Forthampton

Richard Bubb borrows money from Elizabeth Hayward and in 1727 - £80 is still owing so he sells the property to John Peace who is acting in trust for Sarah Jones [widow of Ralph Jones late of Tewkesbury innholder]  for £110 – it is described as:-

1752 – Sarah Granchew [first husband John Peace deceased] and her son John Peace sell to Daniel Insoll for £40 – Samuel Rose and James Turner are Trustees for this being a settlement by way of jointure in the marriage of lately had between Daniel Insoll and Mary his wife. Subject to the £80 and interest

1759 – Daniel Insoll sells to George Hawkins of Tewkesbury haberdasher of hats, the equity of redemption of

All that Messuage or Tenement situate lying and being in Tewkesbury in a certain street there called the High Street otherwise the Oldbury Street on the North side of the said street formerly in possession of Nicholas Allen afterwards of Richard Bubb, John Peace baker, Sarah Granchew, Joseph Heath and William Probert but now of Sarah Moore widow having
A Messuage or Tenement heretofore of James Kingsbury afterwards of Nutt Kedwards and now belonging to John Bush esq on the North side
A Messuage or Tenement formerly in possession of Bartholomew Sweet since of William Smith butcher but now in possession of John Kingdon on South side
All which said Messuage or Tenement hereditaments and premises were formerly the estate and inheritance of Sarah Granchew widow afterwards of Daniel Insoll since of George Hawkins haberdasher of hats who sold and conveyed the same premises to the use of Richard Insoll the younger his heir forever by a certain Indenture of Lease and Release dated 12th / 13th June 1772In

All that Messuage in High Street formerly in possession of Richard Bubb; John Peace baker; Sarah Granchew; Joseph Heath; William Probert but now of William Gardiner stonemason as tenant having Messuage heretofore in occupation of Nutt Kedwards then belonging to John Bush esq but now the property of Thomas Woollams gent and in the occupation of Mr [blank] Kingsbury on north – and Messuage formerly in possession of William Smith butcher after of John Kingdon and now the property of Samuel Wilkins and in the occupation of Mr [blank] Williams toyman on south.

William Heath in his will of 1792 devised his Messuage in High Street in occ of Wm Gardner to wife for life and then to Brother Richard Heath. Richard Heath will of 1819 devised Messuage being no. 27 High Street to John Pritchard

In 1831 John Pritchard sells to Joseph Hawkes for £265 paying off the £184 owed to John Ancill. Messuage now in the occupation of Carew Noxon

From abuttals in early Deeds from 1726 it is known that names in no. 26 High Street are: