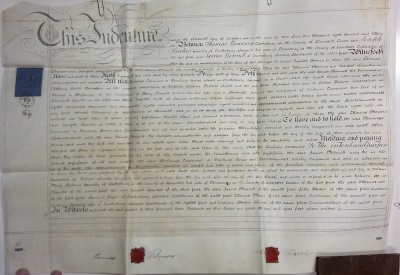 This Indenture dated 12th October 1836 and made between: 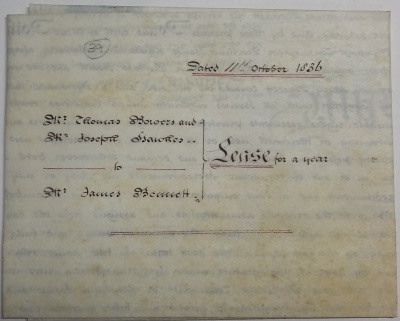 Whereas by Indenture of Lease and Release dated 21st / 22nd December made between:

And Whereas by Indenture dated 4th July 1833 made between

All that Messuage or Tenement or Dwelling House situate in Tewkesbury in a street there called the High street otherwise Oldbury Street heretofore in the successive occupations of William Gardner, Richard Heath, said  John Pritchard but now of Carew Noxon cordwainer having

To use of said James Bennett his heirs and assigns forever

Said Joseph Hawkes covenants he has done nothing to encumber

Thomas Bowers, Mary Holland and Joseph Hawkes agree to execute any reasonable deed and assurance to more effectually and satisfactorily assure the hereditaments and premises unto said James Bennett

And Whereas by an Indenture dated 25th December 1727 made between

And Whereas by another Indenture dated 1st January 1820 made between