1760 – Lease and Release – Ashmead and Welsh to Nutt Kedwards 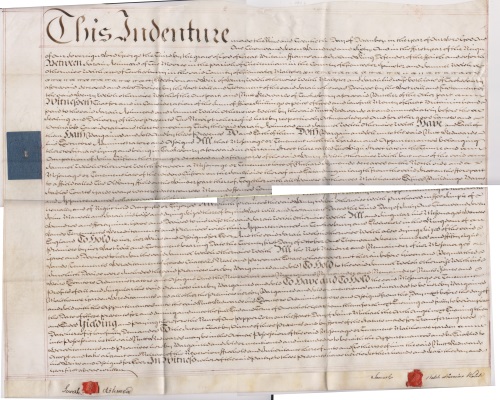 Whereas by Lease and Release dated 14th / 15th July last past between Samuel Welsh and Sarah Ashmead reciting Indenture of 12th July between:-

It is recited that by Indenture dated 9th April 1746 made between:-

April 1746 departed this life having made his Will dated 3rd July 1749 whereby he gave and devised to Sarah his wife – all his Messuages etc. forever - -

And that Sarah the widow, sometime after her husband, died having made her Will dated 21st October 1758 and gave and devised to her son Samuel – All the residue of her Messuages etc – and said mortgaged premises were part of the Messuages given to Samuel – and that the principal money of £200 remained due to Sarah Ashmead – and that Samuel Welsh having occasion for further £200 – it was agreed that for better securing the £200 and the new advance of £200 – all the premises should be assigned to Edward Ransford esq.

AND WHEREAS Nutt Kedwards contracted with Samuel Welsh for purchase of said Messuage or Tenement, Malthouse and premises – being only part of the premises comprised in recited mortgage AND in regard Joseph Fryzer, bricklayer, who hath purchased rest of such mortgaged premises and hath given Sarah Ashmead security for her money in the room of said premises contracted for by said Nutt Kedwards – and she hath agreed to join with said Samuel Welsh in conveying premises to Nutt Kedwards.

Now this Indenture witnesseth that for £294-15s-0d to Samuel Welsh by Nutt Kedwards - The Messuage, Malthouse and Garden mentioned to Sarah Ashmead in Indenture dated 14th and 15th July last is conveyed to Nutt Kedwards