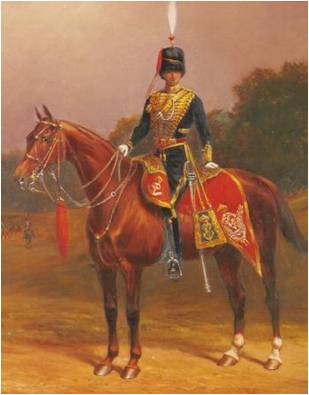 The Gloucestershire Yeomanry (volunteer cavalry) had been formed in Cheltenham by the inspiration of Major Powell Snell of Temple Guiting, who raised the first troop in 1795 at Plough Inn[1]. He was a keen soldier and active country gentleman, who acted as a Justice of the Peace in the Cotswolds. He was a great racing enthusiast. and he owned some of the best racehorses in the West of England. (This was a time of great interest in racing; portraits of famous racehorses hung with paintings of lords and ladies in the stately homes of England. Jeremiah Hawkins' horse was painted by Turner. Even Tewkesbury had its racecourse on the Ham in Bennett's day.) When Powell Snell had a good win the bells of Temple Guiting would be rung, and he would give a generous distribution of wine and beef to his poorer neighbours. Like some other country gentlemen (e.g. the Lechmeres of Hanley Castle), he was interested in the history of his county, and he wrote history and poetry, including an ode on the peace of Amiens in 1802, when hopes were raised, only soon to be dashed.

An example of Major Snell's work as a magistrate is given in the Gloucester Journal for October 10th., 1796. He heard a case concerning a Welshman and his team of eight drovers, who had made an unprovoked attack on John Walker, Lord of the Manor of Guiting Power. Fortunately for the Welshman, John Walker agreed to stop the prosecution at the next Quarter Sessions, to which Powell had duly bound him down, on condition that the offender paid ten pounds in alms for the poor of the parish. This demonstrates that the country gentry were not necessarily of the 'hang 'em or flog ' em' brigade.

In the absence of an effective police force, the Yeomanry was the only reliable and efficient force for the maintenance of public order other than the regular Army.[2] This was partly why the landed gentry were willing to organise, and in some cases pay for the uniforms of, the local volunteer cavalry. In Felix Farley's Journal of October 13th., 1810 'a desperate affray' took place at Gloucester between a detachment of volunteers from a regiment of Irish militia, who were en route for the depot at the Isle of Wight, and a body of townsmen and others. The dispute began at the Swan Inn. The magistrates used their authority as civil power to call out the Gloucester Yeoman Cavalry. They were eventually able to 'quell the tumult' and arrest a number of people. 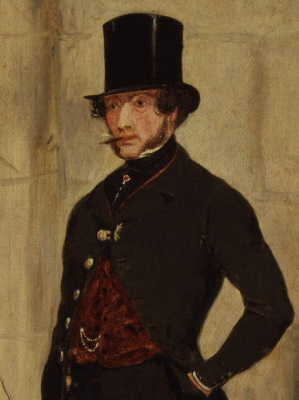 Marquis of Worcester by Henry Alken

In 1827 the greater number of Yeomanry Corps throughout the county were disbanded, and in 1834 a new regiment was formed combining the independent troops, the Gloucestershire Yeomanry Cavalry. It was commanded by Henry, Marquis of Worcester, who had fought in the war against Napoleon, serving with the 10th. Royal Hussars. The county appeared quiet by 1835, when Colonel Fuance, addressing the Regiment, said, 'It is not very probable that any call will be made on the military in aid of the civil power for the preservation of peace.' However, the Gloucestershire Yeomanry would, if needed, answer any call 'with alacrity, zeal and goodwill'.

Tewkesbury volunteers were not called into action against their own townsmen. When, in 1831, there was need to quell the unrest mentioned in the article on unrest in Gloucestershire in the nineteenth century[3] it was the dragoons from Gloucester who were summoned to deal with the riot, and who charged down High Street with sabres drawn. In October 1834, 300 labourers at Overbury demonstrated their anger at cuts in wages with acts of violence at the time of the Mop Fair. The magistrates dealt with them by issuing warrants for the arrest of the ringleaders, and they were apprehended by the police without any need to call on the troops. But if Gloucestershire was quiet, the same was not true of other counties where large industrial centres saw more intense activity by the Chartists.

The Chartists had only a small following in Tewkesbury, and in the summer of 1834 they had hired a room in Church Street, 'where they assembled nightly'. On Sundays it was often possible to hear a Chartist speaker in the open air in the area near the town. We do not hear of violence in connection with this, however, and the Yeomanry were not called out. The group disbanded in November 1839 when their secretary and treasurer, 'a journeyman stocking-maker' absconded with the society's purse, as Bennett related with obvious glee. Our local chronicler was not above a bit of schadenfreude over the downfall of the Chartist leader, who ended up by being transported for life.

[The regiment received the prefix “Royal” in 1841 and by 1847 were the Royal Gloucestershire Hussars, a title they retained thereafter. The headquarters remained at Cheltenham]

The involvement in public service of the leading members of the propertied class in the Tewkesbury area was considerable. The Justices of the Peace included representatives of the families of Dowdeswell (Bushley),  Lechmere (Hanley Castle),  Yorke (Forthampton), Holland, Martin and Fulljames (Hasfield).

Bennett's Tewkesbury Register for 1839 reports an episode which epitomises the 'public service' aspect of some of the leading citizens of the area. In July of that year the Tewkesbury Independent Englishman's Friendly Society was celebrating its fourth anniversary with a procession to the Abbey church, followed by a Dinner in the Theatre for about thirty honorary members and 188 ordinary members. Edward Holland, Esq. of Dumbleton had agreed to take the chair, 'but the meeting was compelled to dispense with his valuable services, in consequence of the Evesham troop of the Yeomanry Cavalry, of which Mr. Holland is Captain, having received orders to hold themselves in readiness to march to Birmingham to check the riotous and alarming proceedings of the Chartists.' William Dowdeswell, M.P. for Tewkesbury, was also prevented from attending as he was on duty with the Upton cavalry at the same place.

It is an interesting comment on the social order of the time, that Bennett felt it appropriate to add that 'the conduct of the ordinary members was exemplary'; a contrast, of course, with the lower classes who were disturbing the peace in places like Newport and Birmingham in connection with the Chartist agitation.

The Dowdeswells were still active with the Yeomanry in 1864, when Captain Dowdeswell led the Worcestershire Yeomanry. Until 1874 Yeomanry cavalry forces were subject to the authority of the Lord Lieutenant of the county. From then onwards they, and other auxiliary forces, were placed directly under the control of the War Office and district military commander.

Serving in the Yeomanry entailed expense as well as time. Many of the activities were very pleasant, including balls, like that given at the Assembly Rooms in Cheltenham by Lieutenant-Colonel Miles and his officers in 1876. The rooms were beautifully decorated for the occasion. When the 700 guests had alighted from their carriages they passed through a guard of honour formed by a detachment of the dismounted Yeomanry. Ceremonial occasions and the security of visitors became part of their peacetime duties. In the early 1880's a series of bad harvests and low stock prices hit the local farmers and membership of the Yeomanry fell off. Things must have improved by 1888, when a Tewkesbury troop was formed again, commanded by Lieutenant Beresford Haywood.

As the nineteenth century progressed, times changed, and the Yeomanry saw themselves more as reserve militia to supplement the armed forces in the defence of their country, should occasion demand. It was the Riflemen who became the image of the Volunteer in the peaceful years of 'the summer of the great Queen's reign'. Units were raised in Tewkesbury, Cheltenham, the Forest of Dean and other places in 1858. The Tewkesbury Register contains many references to the Rifle Corps in the 1860's. The reform of the Army in 1881 gave status within the Gloucestershire Regiment to the Volunteers, with their green uniforms, but it was now the police who were the keepers of public order.