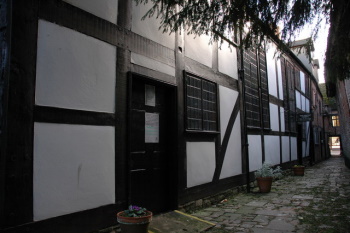 Starting life in the fifteenth century as a medieval house, it was a roomy dwelling for an affluent Tewkesbury family. It is thought that by the mid-seventeenth century, the house had become the location for a Nonconformist group, the Baptists, to hold their meetings. If proven, this would make the Chapel the oldest of its type still in existence. During the eighteenth century, the house was transformed into a simply decorated chapel with a pulpit, baptistery and pastor’s room. In 1805, the congregation moved to a larger property and the building was once again returned to domestic use with the two end bays converted into small cottages.

During the 1970s, the dilapidated building was restored to its 1720 appearance by Tewkesbury Borough Council. Today the Chapel is an important and loved heritage building. It is managed by the John Moore Museum, part of the Abbey Lawn Trust. The Trust is a building preservation charity which cares for significant listed buildings and the Abbey Lawns in the historic heart of Tewkesbury, Gloucestershire. To find out more about the history of the chapel, go to the John Moore Museum website

A report written by the  Gloucestershire Dendrochronology Project in 2020 describes the results from tree-ring dating using twelve cores obtained from oak timbers from Old Baptist Chapel. Nine of the twelve samples provide absolute dates, and two timbers that retain bark edge were felled in AD1458. The other seven dated timbers all have felling date ranges coeval with the two that were felled in AD1458, suggesting a single phase of construction for the timber framed building. The report is available on this page.

For a history of the Baptist Church in Tewkesbury and it's influence on the wider world, read Jonathan Smalley's article