by Debbie Dean
The following is a transcription of an article published in THS Bulletin 1 (1992) by Debbie Dean,[1] granddaughter of Franciszek Dziamarski and Krystyna Magier.
When war broke out in 1939 Poland was one of the countries most affected, and it had to endure merciless invasion by Hitler’s troops. Many Polish people living quiet lives today suffered heavily from the Nazi-Soviet Pact, which was made on 23 August 1939. The agreement meant that Poland was divided between Russia and Germany, and so Russia regained the land it had lost at the end of the First World War. The Polish people were now very confused, and did not know what the outcome of this pact would mean to their lives. Unfortunately, they were soon to find out on 17 September 1939, with the Russian forces moving into Poland and taking Polish people from their homeland. Many Polish people were moved from their homes to camps in Siberia. My grandmother and her family suffered this upheaval, and were now set to start a journey to free themselves from Nazi and Communist regimes. At the young age of 15 my grandmother, Krystyna Magier[2] and her family, with 3,000 other Polish refugees, had constantly to move from one part of the world to another in their efforts to live a free and normal life. When they were taken from Poland, they were crowded into small train carriages and taken to Siberia, where they spent two years in Russian camps living in dormitory type tents. 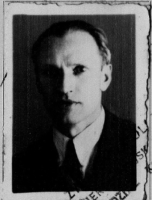 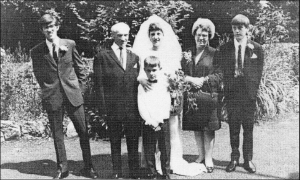 The marriage of Debbie’s mother, Bogusia Dziamarska, and father, Ronald William Dean, on 12 July 1969 at the Catholic Church then at The Mythe, Tewkesbury.

Her grandfather died in 1975

1. Mrs. Debbie Holtham (nee Dean), has kindly added valuable facts which are contained in the subsequent footnotes. [Editor]
2. Her married name is Dziamarska.
3. Wladyslaw Sikorski (1881-1943) who became Prime Minister of the Polish Government in Exile and Commander-in-Chief of the Polish Armed Forces. He advocated a restoration of good relations with the Soviet Union after its invasion of Poland. However, in  April 1943, Stalin broke off relations following Sikorski's request that the International Red Cross investigate the Katyn Forest massacre. On 4 July 1943 Sikorski was killed in a plane crash off Gibraltar, the causes of which remain controversial. [Editor from Wikipedia]
4. In 2012 he was aged 77.
5. They still live in Ontario and are in regular contact.
6. For example, great-grandfather Francez  had been a Banker - the Dziamarski family was wealthy.
7. My family lived at 5 Northway Lane.
8. It has now been converted into cottages and the Catholic Church is located in Chance Street. [Editor]