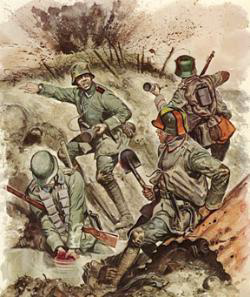 Before 21 March 1918, Tewkesbury had lost 131 sons of Tewkesbury to the first three and a half years of the war. Before the war ended, another 64 sons - and a daughter - were lost. It might seem as though the worst was over - but the average loss per month was 3 while in the last 8 months of the war 8 were lost each month.

21 March 1918 is a ‘Black Letter Day’ because the Germans sprung an unprecedented surprise with its Kaiserschlacht – the Emperor’s Attack a massive offensive on the Western Front by which it was aimed to make up for the failure of 1914 and finally capture Paris.

And they almost succeeded!

It could do this by removing troops from Russia after the Communist Revolution to attack the allies before the USA could transfer enough troops to make a significant shift in the balance of military power.

The British bore the brunt of the attack firstly over the territory won in the battles of the Somme and Passchendaele. Many of our soldiers were young conscripts with minimal training – 19 Tewkesburians were killed with many more wounded or taken prisoner.

The preliminary ‘Hurricane Barrage’ of shells and bombs killed 7,500 and then followed new mobile Germans tactics, bi-passing and then surrounding defensive points using Storm Troopers. The British were compelled into a fighting retreat both sides killing 40,000 and losing huge swathes of painfully gained land. Yet the Germans did not succeed in their strategic aims and so mounted four other attacks across the whole front south of Ypres.

On 6 June 1918 the attacks petered out – mainly because the enemy had run out of supplies and veteran soldiers due to the stranglehold of the British Naval Blockade. There was no German victory – what on earth could happen next?

[The answer will follow in August – isn’t it a long time if you are suffering the ordeal of our grandfathers.]