Abstract of Title to Lot 5 part 1 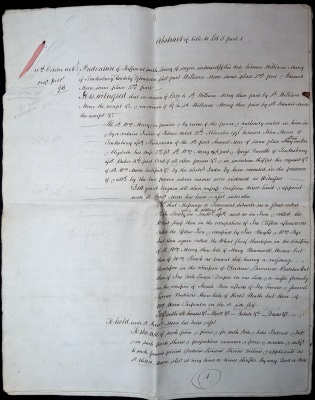 Together with all the houses etc – Reversions etc – Deeds etc To hold unto said Edward Moore his heirs and assigns To the use of such person or persons and for such estate and estates, interest and interests and in such parts shares and proportions manner and form and under and subject to such powers provisos considerations limitations Directions Declarations and Appointments as said William Moore should at any time or times thereafter by any Deed or Deeds 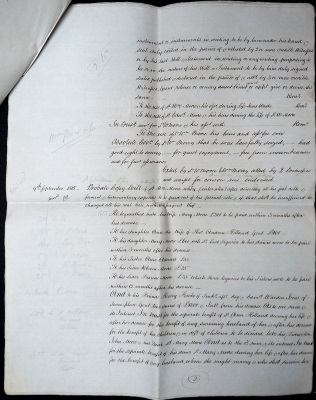 Absolute Covenants by said William Merry that he was lawfully seized
Had good right to convey
For quiet enjoyment
Free from incumbrances…… and for further assurance
Executed By said William Moore; and William Merry attested by 2 Witnesses and receipt for consideration money endorsed 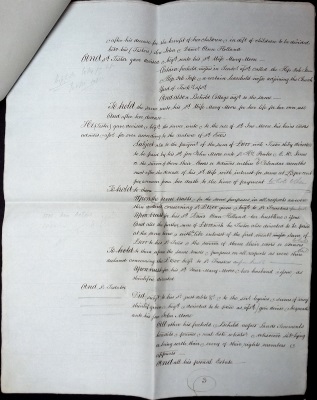 And also a Leasehold Cottage adjoining to the same To hold the same unto his said wife Mary Moore for her life for her own use and after her decease - He (testator) gave devised and bequeathed the same unto and to the use of said John Moore his heirs, executors administrators and assigns forever according to the nature of said estates Subject also to the payment of the sum of £1000 which Testator thereby directed to be paid by his said son John Moore unto said Henry Fowke and Edmund Warden Jones or the survivor of them their executors or administrators within 6 calendar months next after the decease of his said wife with interest at £5 per cent per annum from her death to the time of payment 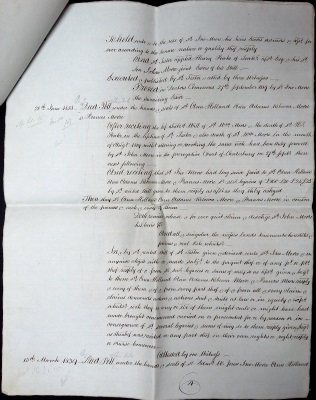 Deed Poll under the hands and seals of said Ann Holland, Ann Adams, Rebecca Moore and Frances Moore After Reciting the before abstracted Will of said William Moore and the death of the said Henry Fowke in the lifetime of the testator and also the death of the said William Moore in the month of August 1819 without altering or revoking the same which had been duly proved by the said John Moore in the Prerogative Court of Canterbury on 27th September then next following

And Reciting that said John Moore had long since paid to said Ann Holland, Ann Adams, Rebecca Moore and Frances Moore the several legacies of £100, £50, £25, £25 by said recited Will given to them respectively as aforesaid as they thereby acknowledged

Then they said Ann Holland, Ann Adams, Rebecca Moore and Frances Moore in consideration of the premises and each and every of them doth remise release and forever quit claim and discharge said John Moore his heirs etc All and singular the Messuages lands tenements hereditaments and premises and real estate whatsoever In and by said recited Will of said testator given and devised unto said John Moore and in anywise charged with or made subject to the payment thereof or of any part or parts thereof respectively of and from said several legacies or sums of money so as aforesaid given and bequeathed to them said Ann Holland, Ann Adams, Rebecca Moore and Frances Moore  respectively and every of them and of and from every part thereof and of and from all and every claim and claims demands action & actions suit and suits at law or in equity and exps? Whatsoever which they or any or either of them might could or might have had made brought commenced carried on or prosecuted for or by reason or in consequence of said several legacies and sums of money so to them respectively given bequeathed as thereinbefore was recited or any part thereof in their own rights or right respectively or otherwise howsoever Attested by one witness 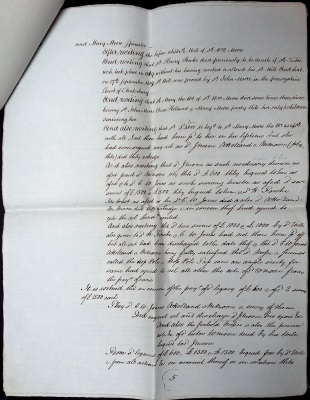 And Reciting that said Mary Moore the widow of said William Moore died some time then since leaving said John Moore, Ann Holland and Mary Moore party thereto her only 3 children surviving her

And also reciting that said £3000 [this has been crossed through in pencil and £300 written above] so bequeathed to said Mary Moore the widow as aforesaid with all interest thereon had ben paid to her in her lifetime but she had never signed any receipt as said J. Moore, A. Holland and M. Moore (party thereto) thereby acknowledged

And also reciting that said two sums of £1000 and £1000 by said Will also given to said H. Fowke and E.W. Jones had not then been paid off but all interest had been discharged to the date thereof and that said E.W. Jones, A. Holland and M. Moore being fully satisfied that said Messuage and Premises called the Hop Pole and Hop Pole Tap were an ample security for the same had agreed to release all other the estate of said W. Moore from the payment of the same

It is witnessed that in consideration of the payment of the said legacy of £600 and aforesaid 2 sums of £1500 each – They the said E.W. Jones, A. Holland, and M. Moore and every of them did acquit release and discharge said J. Moore his executors etc and also the Freehold Messuages and also the proven? Estate etc of said testator William Moore deceased by his Will bequeathed to said John Moore 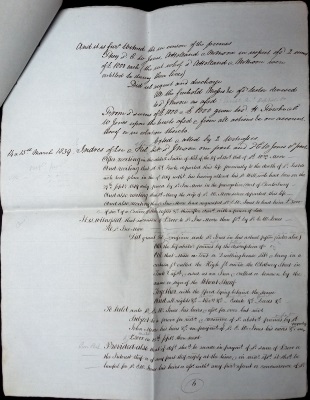 No Caption
Click Image to Expand
And it is further witnessed that in consideration of the premises – they the said E.W. Jones, A. Holland and M. Moore in respect of said 2 sums of £1000 each (the interest whereof said A. Holland and M. Moore were entitled to during their lives) did release acquit and discharge All the Freehold Messuages etc of said testator devised to said John Moore as aforesaid from the said sums of £1000 and £1000 given to said H. Fowke and E.W. Jones upon the trusts aforesaid and from all actions etc on account thereof or in relation thereto Executed and attested by 2 witnesses

Indentures of Lease and Release between said John Moore on the one part and said E.W. Jones of the other part

All the before abstracted premises by the description of

Together with the Yard lying behind the same
And all rights etc – Reversions etc – Estate Right etc – Deeds etc
To hold unto said E.W. Jones his heirs etc forever

But nevertheless Subject to a proviso for redemption and reconveyance of said abstracted premises by said John Moore his heirs etc on payment to said E.W. Jones his executors etc of £3000 on 15th September then next

Provided also that if default should be made in payment of said sum of £3000 or interest thereof or any part thereof respectively at the time and in manner aforesaid it should be lawful for said E.W. Jones his heirs or aforesaid without any further assent or concurrence of said 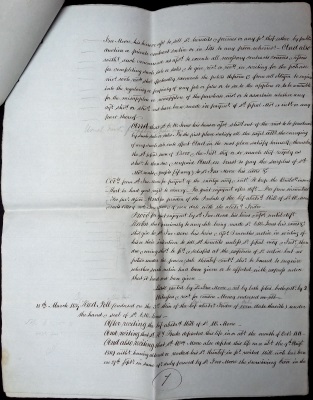 And that said E.W. Jones his heirs or assigns should out of the moneys to be produced by such sale or sales – In the first place satisfy all the expenses attending the carrying of any such sale into effect

For payment of the mortgage money and interest To keep buildings insured He had good right to convey For quiet enjoyment after default Free from incumbrances For further assurance - production of the Probate of the before abstracted Will of said William Moore; Deed Polls of 20th June 1828 and of even date with the abstracting Indenture

Declaration that previously to any sale being made said E.W. Jones his executors etc should give to said John Moore his heirs and assigns 3 months’ notice in writing of his or their intention to sell said hereditaments unless said principal money and interest then due and owing should be paid and satisfied at the expiration of the said notice but no purchaser under the power of sale thereinbefore contained should be bound to enquire whether such notice had been given or be affected with express notice that it had not been given

Deed Poll (endorsed on the 3rd skin of the before abstracted Indenture of even date therewith) under the hand and seal of said E.W. Jones After reciting the before abstracted Will of said William Moore And reciting that said Henry Fowke departed this life in or about the month of October 1818 And also reciting that said William Moore also departed this life on or about the 9th August 1819 without having altered or revoked his said thereinbefore in part recited Will which had been on 27th September in same year duly proved by said John Moore the surviving executor in the 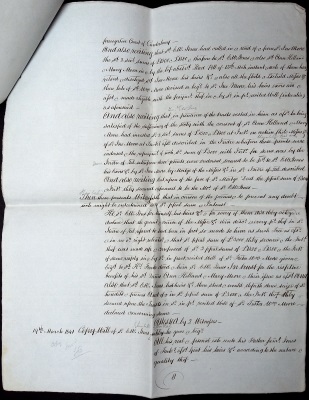 No Caption
Click Image to Expand
Prerogative Court of Canterbury

And also reciting that said E.W. Jones had called in and received of and from the said John Moore the said 2 several sums of £1500 and £1500 and thereupon he said E.W. Jones and also Ann Holland and Mary Moore in and by the before abstracted Deed Poll of 13th March instant and each of them had released and discharged said John Moore his heirs etc and also all the freehold and leasehold Messuages etc then late of said William Moore devised or bequeathed to said John Moore his heirs executors administrators and assigns and made chargeable with the payment thereof in and by said in part recited Will (inter alia) as aforesaid

And also reciting that in pursuance of the trusts vested in him as aforesaid he being satisfied of the sufficiency of the security with the consent of said Ann Holland and Mary Moore had invested said 2 several sums of £1500 and £1500 at interest on certain freehold Messuages etc of said John Moore at Tewkesbury aforesaid described in the Indenture whereupon those presents were indorsed and the repayment of which said sum of £3000 with interest for the same was by the Indenture of release  whereupon those presents were endorsed secured to be paid to said E.W. Jones his executors etc by said John Moore by mortgage of the Messuages etc in the said Indenture of release described

And also reciting that upon the face of the said Mortgage Deed the principal sum of £3000 and Interest thereby secured appeared to be the moneys of the said E.W. Jones

Then those presents Witnessed that in consideration of the premises and to prevent any doubt which might be entertained as to the said principal sum and interest – He the said E.W. Jones for himself and his heirs etc and for every of them did thereby acknowledge and declare that the grant and conveyance of the Messuages etc therein described and every part thereof in said Indenture of Release referred to had been in fact so made to him as such Trustee as aforesaid and in no other right whatsoever and that said Principal Sum of £3000 thereby secured and the interest thereof was made up and composed of the said 2 Principal Sums of £1500 and £1500 and the interest of the same respectively in and by the said part recited Will of said testator William Moore given and bequeathed to said Henry Fowke deceased and him the said E.W. Jones  IN TRUST for the respective benefits of his said daughters Ann Holland and Mary Moore and their issue as aforesaid

And also that said E.W. Jones his heirs etc then stood and would thenceforth stand seized of said hereditaments and premises and of and in said Principal Sum of £3000 and the Interest thereof thereby secured upon the Trusts in said in part recited Will of said testator William Moore declared concerning the same

Copy Will of said E.W. Jones whereby he gave and bequeathed – All his real and personal estate unto his father Samuel Jones of Tewkesbury aforesaid gentleman his heirs etc according to the nature and quality thereof 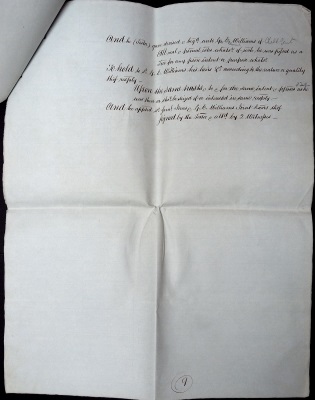 No Caption
Click Image to Expand
And he (Testator) gave devised and bequeathed unto G.E. Williams [of Cheltenham gent] All real and personal estates whatsoever of which he was possessed as a Trustee for any person intent or purpose whatsoever To hold to said G.E. Williams his heirs etc according to the nature or quality thereof respectively Upon the same Trusts and to and for the same intent and purposes as he was then or should be seized of or interested in same respectively

Signed by the testator and attested by 2 Witnesses