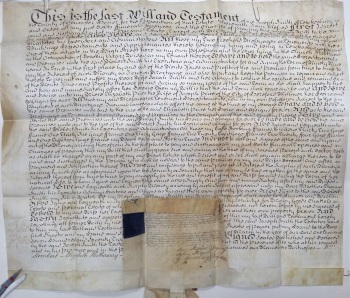 On Cover: Probate of the Will of Joseph Smith deceased – 31st March 1772

Also I give and devise unto my dear brother Robert Smith of Tewkesbury maltster his executors and assigns – All those my two freehold Messuages or tenements with the buildings, hereditaments and appurtenances thereto belonging lying and being in Tewkesbury aforesaid

By and out of the Rents, Issues and Profits of the said Premises from time to time to pay the interest of such money as I owe on mortgage and also to put and keep the premises in repair and subject thereto to permit and suffer my dear wife Sarah Smith and her assigns to receive the residue and remainder of the Rents Issues and Profits thereof for and during so many years of the said term as she shall happen to live

And from and immediately after my said wife’s decease

Also I give to the said Robert Smith – my silver watch

Also I give and bequeath unto my said wife Sarah Smith – all my money, securities for money, goods, chattels, effects and personal estate of whatever nature kind quality soever or wheresoever not hereinbefore disposed of

Note in Margin states: - Examined with original Will by Thomas Collins