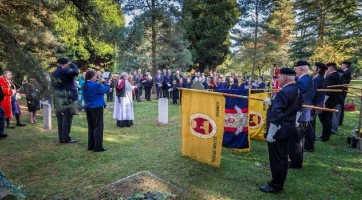 On 10 October 2018, citizens of Tewkesbury formally welcomed home Pte Henry John Waylen. He had died of TB in May 1917, contracted in the forgotten campaign in Greece. He has since rested in an unmarked grave for 101 years.

The Commonwealth War Graves Commission agreed to our request to provide him with a belated headstone and, here, it is being formally blessed by Rev. Charles Whitney in the presence of John Sidebotham from Australia – the only living relative. We were honoured by the presence of the Mayors of Tewkesbury, the Rifles Regiment, pupils of Queen Margaret’s School and local people.

We are very grateful to Pete Godwin for organising the parade, so well supported by fellow members of the Royal British Legion. It was such a moving occasion in so peaceful a setting.

Post Scriptum: Historical Research can never consider to be ended! After the ceremony, we had a discussion about how Henry found himself in Salonika. Malcolm Waldron went home, revisited the record sources and found out that much had changed since we wrote the book in 2015. To find the answer to the question, see Waylen & Salonika [Malcolm Waldron]