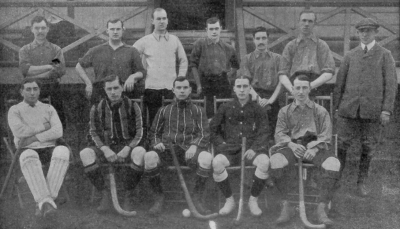 From the Tewkesbury Register newspaper 30 September 1905

TEWKESBURY HOCKEY CLUB, Tuesday evening last a special meeting of the members of the Hockey Club was held at headquarters (the Hop-Pole Royal Hotel), to consider the resignation of the Hon. Sec. (Mr. Colin W. Holloway), who is leaving Tewkesbury to take up an appointment at Malinesbury.

Mr. H.W. Brown presided, and there were also present the Rev. F.H.L. Langford-James, Messrs. Colin Holloway, W. King (Assistant Hon. Sec.),  J. Willis, N.G. Moore, T. Rodway, W.W. Jackson, J. Button,  J.H. Weaving,  W Heath, and C.A. Roberts. The Chairman, in commenting upon the unfortunate circumstances which rendered the meeting necessary, said the (club was about to suffer a great loss, and, he might say, an irreparable loss in the departure from Tewkesbury of Mr. Holloway. He would not take up the time of the meeting in making eulogistic remarks upon the work Mr. Holloway had done for the Club, and in the interests of Hockey generally. All knew what he had done, and whilst expressing the greatest regret at his departure, all would join in offering him the heartiest congratulations upon his promotion. (Hear, hear).

Mr. Holloway briefly acknowledged the remarks of the Chairman, and the hearty way in which the meeting had received them. He said that the great amount of pleasure be had derived from his connection with the Hockey Club amply repaid any work he had done. Whilst away in his new sphere of work be should always look forward for news of the Tewkesbury Hockey Club, and trusted it would long maintain its present proud position at the top of the tree at this end of the county, (hear, hear).

Mr. Jackson then proposed that the Rev. F.H.L. Langford-James be appointed to succeed Mr. Holloway. The loss of Mr. Holloway was a very severe one, and be thought they would be fortunate if they could induce Mr. Langford-James to accept the appointment, as he felt that the Club would then be able to keep its record up to what it had been in the past. He felt that with the Rev. F.H.L. Langford-James and Mr. Walter King, who had already done much valuable work as Assistant Hon. Sec., as joint Hon. Secs., the interests of the Club could safely be left in their hands.

The election of Rev. Langford-James as joint Hon. Sec. having caused a vacancy on the Committee, Mr. Butland proposed that Mr. H.W. Brown, who, although a Vice-President of the Club, had not the locus standi of a Committee man, he appointed to the vacancy.

Mr. Willis seconded this proposition, which was carried unanimously.

Mr. Butland raised a discussion upon the utility of appointing a Chairman of the Committee, and ultimately the question was deferred.

The meeting closed with the usual vote of thanks to the chairman for presiding.

[The photograph is of Tewkesbury Hockey Club in 1907, from the Cheltenham Chronicle & Gloucestershire Graphic newspaper of 23 March 1907.]