by Cliff Burd
"This is a Grade II listed building and includes No. 36 St. Mary's Lane. It is a mid-16th century timber framed building, tension braced with plaster panels. The first floor is jettied and it has a steep tiled roof with gable ends. There are two stories and an attic, and two gabled dormers. The first floor has two large casements of three lights, and the ground floor has two nineteenth century shop windows each off four lights, with a door at the side. Above this and between the floors is facility for a fascia applied to the bressumer[1]. At the rear is a brick-faced gable wing." 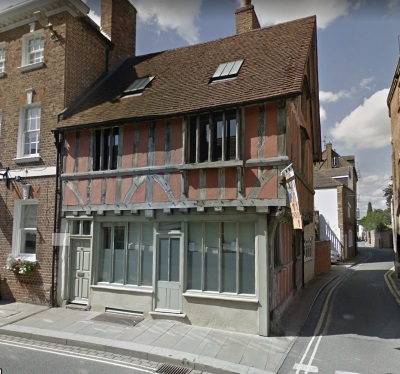 This official record[2] is a basic, cold description of a building erected on a site which could well have been within the confines of the original Abbey walls before the Dissolution of the Monasteries in the reign of King Henry VIII. As such the description does not have the feel of a building in which people and families lived and worked and probably died. It does not tell us the kind of people they were or what were their occupations. So we have to consult other documents in order to get a feel for its history.

The deeds of the property, which are available, date from 1777 and show that it was owned by one Robert Vigor Esq., and that on 3rd July 1777 it was leased for one year to Edmund Turbeville, Gent. of Bristol, for 5 shillings, worth at that time approximately £15 in today's money.[3] Edmund Turbeville then purchased the property for £20 (worth £1,160 today), [4]

At this time the house was occupied by William Spooner, who was a journeyman weaver, probably renting a loom or looms from one of the local manufacturers, as was the custom. There is no indication of the rent paid, but other cottages in the town were costing 2-3 shillings per week at this time.

In 1783 the property was sold to William Collett, a maltster, of Tewkesbury, for the sum of £25 (£1,390 today). There was a second party to the purchase, William and Hannah Chandler, William being described as a labourer. Neither William nor Hannah could write and both made their mark with a cross.

The property changed hands in 1789, but the sale was combined with other property in Apperley and Deerhurst, along with buildings in Tewkesbury, so we are unable to get an individual cost for the building.

April 1804 sees another transfer, this time the purchasers are William and Hannah Price, using a mortgage of £25 from Nathaniel Hattland, a banker in Tewkesbury'. This relates to a current value of £l,125, a decrease in the value of the building. That trend continued in 1812, when William Price sold the property to Thomas Sandiland for £34.17.0d (£880 today), which constituted a substantial drop in value! Thomas Sandiland is noted in a Poll Book of the time as an Occupier, indicating his right to vote. [5]

Limitations of documentary resources dictate that we must wait until the census of 1851, which showed that Henry Key, aged 71, was in occupation. He was a retired Revenue Officer and lived with his wife Frances and one son, William Key, aged 48 and a plumber.[6]

For further information we are indebted to documents related to the borrowing of money. An Agreement, dated 5th May 1851, reveals that Edmund Rudge, a tanner and a notorious miser, borrowed £12,012, an enormous sum and equivalent to "The properly to be redeemed upon payment of this sum, and with a condition that the property be sold to Thomas Whitehouse, to be used as a shop" - this is the first mention of the building being used as a shop, Subsequently, a mortgage dated 28th June 1857 tells us that John Cheese, Gent of Bushley, and Henry Groves, innkeeper of Tewkesbury, paid £135 to Thomas Whitehouse for the property (£5,800 today). Neither Cheese nor Groves could write and both signed the deed with a cross. The tenants at this time were John Wood, a saddler, and his wife, Mary.

In 1858 George Hale, a baker, was in occupation, having paid £25 (£1,000) to Mary Ann Wood, by this time a widow. Then in 1860 we see an agreement between the same George Hale and Thomas Whitehouse for lease of the building for a period of five years at an annual rental of £14, payable quarterly (£560 today). George Hale was still in occupation in 1863. 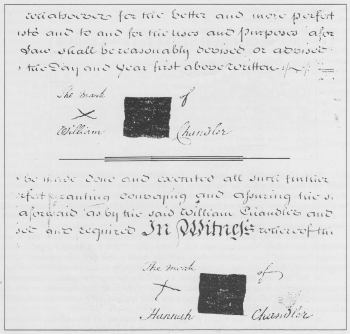 The census of 1871 shows that the occupier had changed yet again since Thomas Bishop, aged 52, a chairmaker, was living at 66 Church Street, together with his wife Mary, aged 58, They were both born in the town.

The value of the property declined further in 1872 when an Indenture of September 24th recites an agreement of 1856, when one John Bird of the War Department, Pall Mall, London, agreed to sell the property to John Wallop of Tewkesbury, a plumber, for £26 (£993)!

Nevertheless, familiar names still dominate the property. In 1874 the said Mr. George Hale was selling two cottages and other premises in St. Mary's Street or Lane, for £50 to Benjamin Hale, possibly his son. George Hale was then stated to be a tanner at Wooton, while Benjamin was described as a tanner of Tewkesbury. At this time, however, Mary Oakey occupied the property. This deed describes a passageway belonging to Thomas Whitehouse over which the tenant has right of way "to and from the pump and closet"! Two years later Benjamin Hale sold out to the said Thomas for £52, about £2,080 today. The value has almost doubled in just a few years!

That happier trend did not continue since the same year (9th June 1874) Thomas Whitehouse and Cornell Prance of Evesham exchanged £45 (£1,840) for the building, conditional upon the property being insured against fire in the sum of £50 (£2,050). The census for 1881 declared that No. 66 was currently unoccupied. In 1885, however. Kelly's Directory records Thomas Whitehouse Jnr. as being in occupation as a grocer, his father Thomas being a coal merchant living in East Street, Tewkesbury.

The census of 1891 tells us that Eleanor Manning is living here as a grocer, together with her father, a widower, and two sons, both scholars. An Indenture dated 1895 recites the sale of several properties. including No. 66 Church Street. with "a bake-house to the rear and a cottage and walled garden adjoining the aforementioned shop." This deed was signed by Ann Bayliss, wife of Joseph Bayliss of Tewkesbury, milk-seller. Nevertheless, in 1899 Eleanor Manning was still occupying the premises. described in the Kelly 's for that year as a shopkeeper and so through each subsequent year until 1910 when Thomas Manning, husband of Eleanor, is the recorded occupant in the Directory. He is stated to be "the Receiving Officer for the Tewkesbury Union and a Collector for the Poor Rates."

The Electoral Roll for the year 1912 shows John Osborne was in residence at No. 66 Church Street. By 1914, however, Albert Spiers, shopkeeper. lived there, but there is no indication of what he is selling. 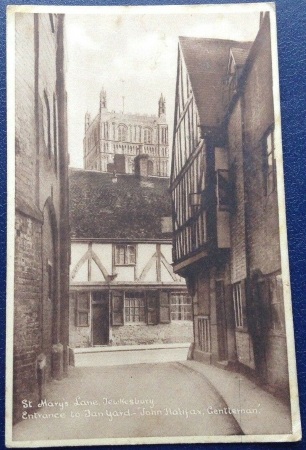 The end of the First World War saw yet another change but it was to be the last for quite some time, since, when Miss Nellie Mustoe took over the shop as a purveyor of confectionery, postcards, etc., it was to be an occupation enduring some twenty years! Local residents still remember her with some affection. 9 At the outbreak of the war in 1 939, Mrs. Nellie Brick was operating the same kind of establishment, the shop also being used by the local Grammar School as a tuck shop! [10]

Sadly, it has not been possible to find a plan Of the Abbey showing an outline of the walls. However, we do know that there are buttressed walls, parallel to the river, at the Victoria Pleasure Gardens. There are also remains of the Abbey walls by the Swilgate Bridge in Gander Lane and adjacent to the Abbey Gateway. The old belltower, or campanile, was sited almost opposite No. 66 Church Street. so it would not be unreasonable to imagine the building being within the confines of the Abbey. A photograph, taken from St. Mary's Lane, shows the property on the right-hand side.

Details of occupation have proved difficult to determine from early documentation since census returns, directories and electoral rolls only give brief details, mostly without house numbers. It has not, therefore, been possible to give a continuous picture of all the owners or residents of No. 66 Church Street. What we have learned from this study of one property is that change in ownership and occupation was frequent and at times very complicated and it was only in this century that the stability, which we imagine was the norm, was achieved.