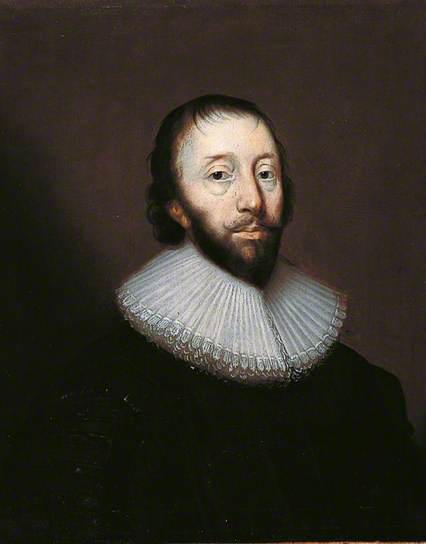 (This introduction is entirely the work of Cameron Talbot, from the draft article written by him shortly before his sudden death in 2001. Ed.)

But which Dudley Digges is the burden of its song?

However, all the other Dudleys in the foregoing list are indeed worthy of our study because they turn out to be one and the same — Sir Dudley Digges, Of Chilham Castle, Kent, first Member of Parliament for Tewkesbury and sometime Master of the Rolls.

(The rest of this article is based on Cameron 's research but has been re-phrased and expanded to cover the many facets of this remarkable man, Ed)

Our Dudley Digges was born in 1583, the eldest son of Thomas Digges and his wife, Lady Anne St. Leger. The Digges were an old Kentish family; Dudley's tomb in St. Mary's Church, Chilham, records thirteen earlier generations. Both his father, Thomas, and his grandfather, Leonard Digges, were notable mathematicians and military engineers.

Amongst Thomas' military achievements was the fortification of Dover Harbour. He was an M.P. in 1572 and again in 1584. He served with the English forces in the Netherlands from 1586 to 1594, being appointed master-general by the Governor, Robert Dudley, Earl of Leicester, to whom he dedicated his military book on ballistics, 'Stratioticos.'[1] Dudley's maternal grand- mother was Ursula Neville, daughter of Lord Abergavenny and a direct descendant of the great Neville family, so much the centre of national and royal affairs in the Wars of the Roses.

Dudley entered University College, Oxford, in 1598 as a gentleman-commoner, graduating with a B.A. in 1601. Following the traditional educational pattern of a gentleman, he then studied Law at the Inns of Coun and, as the scion of a wealthy house, no doubt made a 'Grand Tour.'

Adulthood took him to the old medieval castle at Chilham, the hexagonal keep of which, though started in 1171, still survives. Dudley built a 'New Castle' alongside it between 1603 and 1616 and it survives as a fine example of a Jacobean country house, probably designed by Inigo Jones.[2] During this period he married Mary Kempe, daughter of Sir Thomas Kempe.

Dudley Digges was knighted in 1607 at a time when a baronetcy was not just an honour but a means by which James I augmented his income. In 1609, Sir Dudley Digges gave {160 to Tewkesbury with which land called the Hollams, one acre in the Old- bury and land in Downbellts meadow were purchased and settled the rents for the use of the Free School.[3]

In 1610, Tewkesbury received a revised charter that made it, for the first time, a parliamentary borough returning two members to Westminster. The first M.P.s were Dudley and Edward Ferrers, of Fiddington and London. Edward's brother William had been very generous in subsidising the Town Council over its heavy Charter expenses and, subsequently, also gave money for the school. Dudley was re-elected several times until 1626; he then sat for his native county, Kent. It seems that it was the patronage of the Earl of Salisbury, chief minister of Queen Elizabeth I and Kin James I, which secured the seat for Dudley.[4]

The notable explorer, Henry Hudson, who had already made three voyages to northem Canada seeking a North West Passage, was financially supported by Digges and others including Sir Thomas Smith of the East India Company and the Virginian Company and John Wolstenholme, a Yorkshire landowner. He was also backed by Henry Frederick, Prince of Wales.[5] The fourth voyage was a disaster: they had to over-winter on the shores of the large bay, which still bears the explorer's name. Most ofthe crew mutinied and sailed home but Hudson, his son and a few others were set adrift in a small shallop and never seen again. All Digges had to show for his interest was to have a cape off the north of Quebec named after him and two small islands now the breeding place of murres.[6]

In 1618 James I, wanting an alternative trade route to China, thought that Digges might find one by making an arrangement with the Tsar of Russia. He thought that a loan of English gold 'coaxed' from the coffers of the Muscovy and East India Companies might help. Sir Dudley was a friend of Lord Wooton, who was seeking new plants for his garden, and whose head gardener was John Tradescant the elder. Sir Dudley needed a useful man to travel with him and Lord Wooton agreed he should take Tradescant. They sailed in midsummer of 1618 going north along the English coast and then east across the North Sea to Norway and round North Cape to Archangel in Russia. With them was the Russian Ambassador going home.

Tradescant collected cuttings of all kinds along the coast He explored the islands around Archangel collecting cuttings, saplinys of fir trees and birches, berries and roses.[7] Sir Dudley travelled overland to Moscow but there is no record of improved trade with China. Russia was recovering from a disastrous civil war under the rule Of the Tsar Michael, the first of the Romanovs.[8]

Back home, Dudley's marriage to Mary Kempe had proved fruitful. Their descendants flourished in Chilham and in Virginia. Dudley himself became a Privy Councillor and, in 1620, led a delegation to Holland. However, in 1621-22 he was so little compliant with the Court measures as to be listed among those whom James dubbed 'ill-tempered spirits.' In 1622 he was sent to Ireland upon an enforced commission.[9]

The opposition to the Crown centred on James I's favourite, the Duke of Buckingham, who continued to hold sway on the accession of Charles I in 1625. With Sir John Eliot and others, Dudley attempted to impeach Buckingham in 1626 and was imprisoned briefly in the Tower without trial.[10]

Unlike Sir John Eliot, who led the opposition to the King over the Petition of Right in 1628 and who was again imprisoned in the Tower where he died. Digges made his peace with Charles and continued to serve the Crown. Always interested in colonisation and a long-time Director of the Virginia Company, he was on the committee to create a college at Henrico in Virginia.[11] In 1634, he was appointed to the Commission for Virginian Tobacco. One of Dudley's sons, Col. Edward Digges, emigrated to Virginia in 1650 and later became Governor. The Digges family has a long history in the U.S.A. In 1636 Dudley himself was appointed Master of the Rolls.

After the death of his father, Dudley's mother Anne Digges had married Thomas Russell of Alderminster, near Stratford-on- Avon.[12] Russell was a close friend of William Shakespeare and was an executor of his will in which he was left 'ffyve poundes.'[13] Thus, Dudley was a stepson of a close friend of Shakespeare.

Dudley's brother Leonard Digges of First Folio[14] fame, who lived in Stratford with his stepfather when not travelling abroad, was a friend of both Shakespeare's fellow actor John Hemmings, who attended Leonard's wedding and signed as a witness, and Ben Jonson, for whose 'Volpone' Digges wrote some commendatory verses. Leslie Hotson has suggested that when Dudley visited his stepfather in late 1610 on business he might well have brought a manuscript of William Strachey's account of the following:[15]

"In June 1609 nine ships left England carrying 600 people to strengthen the new English colony of Virginia. The 'Sea Venture', the lead ship carrying Sir Thomas Gates, the new Governor, and Sir George Somers, the Admiral of the Virginia Company, was separated from the rest by a hurricane The 'Sea Venture ' was presumed lost but limped to Bermuda before running aground with all aboard making it safely ashore.

The Bermudas had a reputation as a place of wicked spirits and devils, but the colonists found it very pleasant, and they lived there for nine months while building a new ship out of native wood. They then sailed to Jamestown, Virginia. The news of their survival caused a public sensation in London."[16]

Several accounts of the wreck and survival of the 'Sea Venture ' were rushed into print and it is almost certain that Shakespeare read the pamphlets including the unpublished account by William Strachey referred to above, which remained unpublished until 1625.[17] Shakespeare undoubtedly used them in writing 'The Tempest' which was first performed at Court on 1 November 1611.[16]

Sir Dudley Digges died in March 1639, aged 58, and his tomb is to be found in Chilham Church. Yet this is not quite the end. Some fifteen years after his death, The 'Compleat Ambassador' was published posthumously. This is an account by Digges of Sir Francis Walsingham's embassy to the French Court (1570-73) during the abortive negotiations for Queen Elizabeth's proposed marriage to either of the Dukes of Anjou or Alençon. This was a serious historical study, which rapidly went to a second edition and was translated into French.[18]

Truly Sir Dudley Digges was a Renaissance gentleman, a man of many parts!