As Poor as a Church Mouse

As ‘Poor as a Church Mouse’? Assessing Wealth from the Ambiguous Source of Probate Inventories in 17th Century Tewkesbury

Tewkesbury is fortunate that many of its probate inventories survive from the early modern period. These legal documents were drawn up to assist the transmission of property after the death of the testator, they were usually drawn up to itemize moveable goods, debts and money owing with a value at £5 or more. Probate inventories have been used for the last three decades by economic and material culture historians to show changes in lifestyle, status, wealth and commercial expansion. However, to do this, the documents are examined in large numbers concentrating on the value of the inventories to determine the levels of wealth in a particular area or amongst a social group. This article studies the probate inventory of a widow from 1692 that had a low monetary value to demonstrate that these documents could misrepresent an individual's economic circumstances.

The monetary values of the sample of Tewkesbury inventories, which I used for my PhD thesis, had males with a mean average of £108.67 and females with £54.18.[1] Many of Tewkesbury's inventories appear to be of a lower monetary value than its surrounding towns this is partly due to only being able to use documents that have survived but also due to Tewkesbury's unique location and economic situation.[2] This article examines the probate inventory of Sarah Mearson dated 1592 whose moveable goods were valued at a lowly £25.1s. [£25.05p].[3] At face value, it would be easy to assume that she was a typical poor widow whose fortunes had been eroded over time. The wills of her husband and her, however, illustrate a different more buoyant economic situation – but one that still had its share of tragedy. [It is likely that in 1690 she lived with her son, Nathaniel Mearson at Nos. 71 and 72 Barton Street with gardens down to Swilgate, the site (with 73) of the recently closed National Westminster Bank.[4] 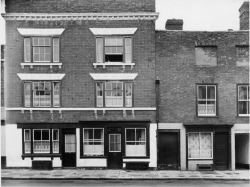 Sarah Mearson owned mainly traditional goods like many in the late seventeenth century, apart from a looking glass in her bedchamber and some possibly cooking books in the kitchen. However, her bedroom had an elaborate carved high bedstead with coverings valued at £3. These were ‘substantial and unmovable’pieces of furniture and provided decoration to a room before pictures became fashionable.[5]  Mearson, apart from her three ‘cubberts’ [cupboards] for storage, owned a round table, two stools and a chair. It is likely that she ate her meals in her room but could also receive visitors here. Only two rooms had tables listed with stools and chairs, this was Sarah's bedroom and the kitchen. She also had another room with one bedstead and two mattresses that was also used for storage. This may have been a servant’s room.

One of her rooms has been rented to a lodger – Mr. Smith. The furniture of his room was assessed at £2 less than Mearson's room. Renting out a room was a way for poor widows to earn extra income. But she would not have been poorly dressed or lacked ready cash as her clothes and money in the house amounted to £5. Sarah did not appear to own decorative items for their own sake as she had no jewelry or silver plate. This may have been due to her family's nonconformist beliefs. Another reason for the low monetary value of Sarah's inventory is that she had no trade goods as she was not involved in business.

However, the most challenging period of Sarah's life was not in her old age, but in 1662, when her husband lay dying. At the time she was a pregnant mother of two children. She was instructed by her spouse to ‘give unto my children fitting education and breeding and provide for them.’[6] Her maiden name may have been Heekes; as this was the surname of one of her executor's and kinsman, but family members on her husband’s side can be traced.

Sarah Mearson lived approximately thirty years longer than her husband and she remained in the family home in Barton Street as her neighbours, ‘the forestreete dwellers’were invited to attend her funeral at Tewkesbury Abbey Church. Sarah did not mention her eldest two children in her will as although they had already been provided for, she may not have been in contact with them or they may have died. Sarah commanded that a number of legacies were to be paid in her will, but these were not to members of the Mearson family or to anyone called Sarah. However, her youngest son, Nathaniel had predeceased her by roughly a year, aged about thirty. He was not married, and the disposal of his estate fell to his mother. She had honoured her son’s wishes and sold his land and property to settle his debts. He requested that 12 shillings was paid per year to a non-conformist minister. Sarah decided the cost of this would be taken from the rent of the one room in her house that was lived in by her lodger Mr. Smith. Her executors were charged with selling her house, but a clause was to remain on the rental of the room forever. How this worked in practice is not known.

Sarah Mearson's inventory illustrates some of the problems of relying on these documents to assess levels of wealth and status of individuals in the early modern period, by judging her inventory by its monetary value; she would appear only as a struggling elderly widow. However, Sarah had married into a respectable nonconformist family and lived on one of Tewkesbury’s desirable main streets. She was fortunate that she owned her own home and it was comfortably furnished, she was also able to earn extra income by renting out one of her bedrooms and she had become impoverished. Sarah seemed to have had many nearby friends and relatives and was in contact with at least her youngest son. The Mearson’s acquisition of property enabled Sarah to live in her family home contentedly until the end of her days. She was, therefore, in no way a mere ‘Church Mouse’.

The Mearsons seemed to be an established Tewkesbury family whose wealth was from the accumulation of real estate passed down the family line. The family also used the same forenames. There were three Nicholas Mearsons: Nicholas’ father was church warden in 1639, an unusual appointment as he was one of the first nonconformists to hold this post when they had been persecuted a few years before.[7] He had lived in the ninth house in the High Street.[8] When this house was inherited, Nicholas willed the property to his eldest son, of the same name when he was twenty-one, along with cottages and gardens in Avonside. His daughter Sarah, named after his wife, was given his meadow, also in Oldbury, when she was twenty-four, or £80. Sarah, their mother was given the family home in Barton Street [71-73 see above] along with three acres of arable land in Oldbury and a meadow in Northway. The land and property were bequeathed from his uncle, Kenelm Mearson; the land had previous been left to his father.[9] There appeared to be a tradition of Mearson’s occupying positions within local government as Kenelm had been bailiff in the 1640s. These positions were seen as ‘aspirational’ and they were held by responsible and upstanding individuals.[10]

Although the family's financial situation would have been assisted by the rent of his inherited real estate, Nicholas Mearson was a successful ironmonger who became a freeman in 1657 after being apprenticed to his father.[11] By 1659 he was producing his own copper token farthings as many English tradesmen did until 1672 due to the shortage of low denomination currency.[12] However, his flourishing trade was cut short as by 1662 Mearson was ‘sick and weak’ in the prime of his life and dead by 1663.[13] It is possible that he may have increased his property if he had not died prematurely. He may have also inherited the silver bowl and six spoons he bequeathed to his eldest son after the decease of his wife. This was not recorded in her inventory as they may have already been received. Since only Nicholas’ will survives, we cannot compare if Sarah’s living conditions became reduced over time. She did not remarry and must have been left sufficient funds to support herself.