The Courts from Red Lane 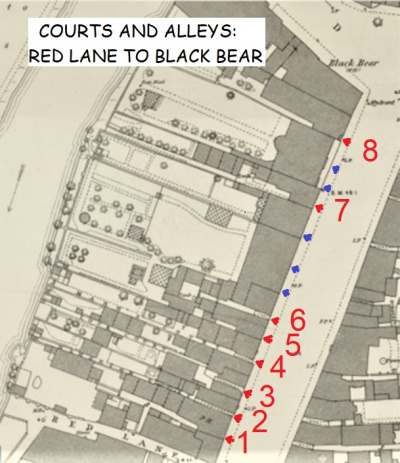 Red Lane turns abruptly away from the river to join the High Street just beyond the Tudor House. The road layout predates the High Street layout and the burgage plots and alleys have been fitted around it.

From Red Lane to the Black Bear there is, or was, a regular pattern of narrow plots behind the front houses which back directly on to the Mill Avon. Because of this they have never been used for through access and there is now a scattering of small courts, often giving access to cottages behind the front houses. If you count your steps from a court entrance, about seven will take you to another court, or where there was once a court. It’s not exact, but it’s close and gives some clues to the regular layout which has been eroded over the years.

The 1884 map of the area came after Avonside, now DF Legal’s offices, and the Riverside were built  and the layout is very similar to today, from the street at least. The only major change is that one property, No 64, has been demolished in the building of Home Abbey House. Unfortunately for our understanding of the earlier changes, there is no record of what Avonside and the Riverside replaced.

After the Post Office is Hammerton Court (2), once occupied by George Hammerton, boat builder. In the past it has been both Monnox and Palmer’s Alley. The front house is now Petit Fleur, a survival of a timber framed building. This was once two properties. The right-hand half was for a while a ‘low class beer house’, the Teddington Arms.

Next is Lock Court (3), which has had even more names; Sparkes Alley (1769), Jeynes Alley (1836), Scott’s Alley (1871) and Lock Court by 1892. It got its name because the lock keeper once lived there and rowed across to operate the lock. The Lock Court ‘front house’ is now Chicago Pizza. Once two shops, this is clearly one building, timber framed behind the brick rendered front and with a roof described by Historic England as ‘characteristic of late medieval town houses’.

60 High Street, now Studio 60, was a derelict timber-framed building recently rebuilt sympathetically in brick. It is the front house to Mann’s Court (4), named for John Mann, a waterman who traded from the landing at the bottom of the plot. Until 1970 it contained two cottages, a range of storage sheds and a pigsty.

61 High Street, now the Panache restaurant, was a beer house, the Ship and Castle, until 1864, and a café or restaurant for much of the twentieth century. It had a court, (5) entered from what is now the front door. Now blocked by the stairs, the remnants can be traced through the building though nothing remains beyond that.

From 62 to 65, there has been wholesale demolition and rebuilding over the past couple of centuries and the plot layout behind has completely disappeared. 62 is a discrete building retaining the seven paces width with its court still visible as a passage and closed off with a door (6) Though part of the plot of 62 at some time it transferred to 61 and was once known as Ship and Castle Passage. It once gave access to at least three cottages.

63, Avonside, is two plot widths, with a central front door which once provided a passage through to a garden which extended into adjacent plots. It was a rather grand gentleman’s residence when built; occupied by Charles Moore, solicitor, and his family for much of the nineteenth century, with two servants. 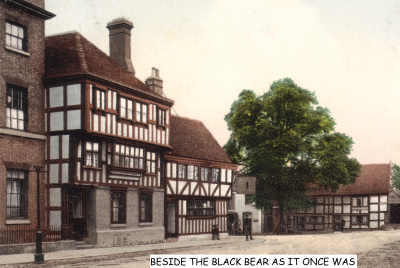 The next building, 64 was demolished to give access to construct Home Abbey House. For a long time this was the Borough Surveyor’s Office. It had an archway for a carriage, possibly for Avonside’s use.

Next is Trafalgar House, which retains a court beyond its front door (7). There was once a pub, the Woolpack, on this site which was pulled down in about 1880 to build the present house.

The Riverside is another of those grand town houses, which probably replaced two earlier houses, leaving no clues to the earlier plots. Next door, though, was a lovely three storey timber-framed building which burned down early in in 1946, and was not rebuilt. The stub, the ground floor, became the Rugby Club before being incorporated into the Black Bear. It’s passage, starting from the door beside the Riverside (8), has long been closed and built over but the evidence of its existence is quite clear.

The range of buildings finishes with the Black Bear, which breaks the pattern. Access was possible from the road so there was no need for a passage.

This range of properties covers a very wide range of age and status, showing how closely together the classes used to live. It’s still possible to glimpse the uniformity of the original plots which extended to the river, where there were landing stages for importing and exporting goods, the source of much of the wealth of the town.