Preserving the Memory of Livestock Markets in Tewkesbury 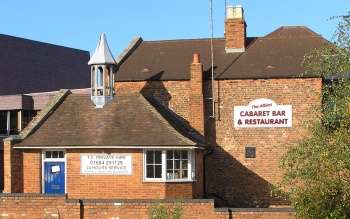 Taxi Booking Office, October 2008 (J. Dixon)
Taxi Booking Office, October 2008 (J. Dixon)Click Image
to Expand
This article was inspired by a request from the Civic Society, which wishes to place a plaque on the wall of the building that today houses a tax hire firm in Oldbury Road. It also enabled the use of photographs of Hone the Auctioneer, kindly made available for study by Angus Hone.
This building was the ‘brick built office and rostrum’ for the livestock market, which operated here after 1850. From 1949 to 1987, the site was converted into a garage for Warner’s Bus Company. 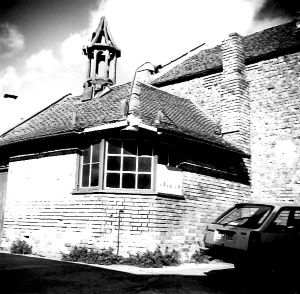 Tewkesbury’s market is even older than Cheltenham's and receives a mention in the Domesday Book.[1] Although markets have been a central feature of Tewkesbury’s historical development, it is likely that established livestock markets arrived after the development of the railways.

It was the Tewkesbury Board of Health which pioneered moves to have a built market in an attempt to improve public health after the two cholera epidemics which caused the board to be established. In 1859 it purchased the Sun Inn to make a market place for cattle and sheep and pulled part of it down; it ran alongside both sides of the newly built Sun Street. (Now demolished, it is replaced by the Nutrition Centre and Woody’s.)[3] 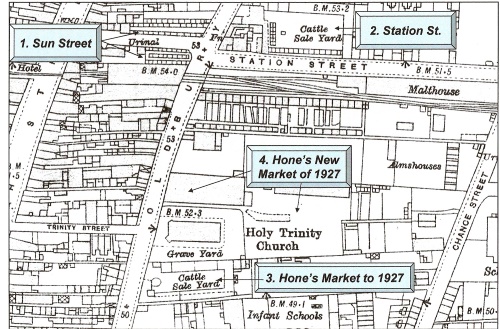 The market was then owned by Philip Thomas, an auctioneer and J.P. who died in 1871. Between 1871 and 1881 Waldron’s Alley led to the Oldbury but, according to John Rogers, “since the cattle market has been enlarged the thoroughfare has been stopped”.[4]

By Thomas’ death, he had opened a second market on the north side of Station Street (the south accommodating the Tewkesbury Branch of the Midland Railway). His son Francis, who became Mayor in 1873, struggled and, in 1885 the year of his premature death, the Town Council was expressing “concern re Mr Thomas' Cattle Yard was dirty; [he] claimed that since inspection, it had been paved”.[5] By the end of the year, there was the announcement: “Sale of Auctioneers: Philip Thomas & Sons to George Hone of Stoke Orchard”.[6] By 1901 the former farmer of 1,000 acres had opened a new cattle market in Oldbury Road (now Hone’s Court).

Aerial Photograph of the Oldbury in 1928 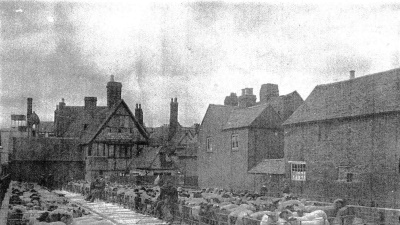 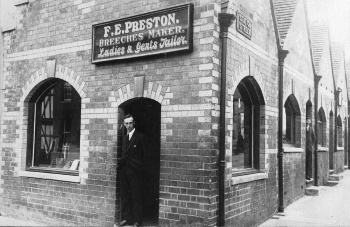 By far the biggest and most valuable was the [2.] Station Street Market owned by the Moore family: the survey revealed the presence of the “brick built office and rostrum”.

One fascinating development, demonstrating the importance of the market to the area, was that of the Market Shops. The Town Council acted as developer by building in 1872 some neo-Gothic lock-up shops for small traders, such as tailor Freddy Preston, along the North side of Sun Street.

The Sun Street Market, however, was evidently ailing by the 20th century, since Peter Preston reported being told that “in World War I a threshing machine had been stored on waste land behind Car Mart and when moved it disturbed hordes of rats, which were despatched by worried neighbours with brooms and any suitable weapon”.[8] 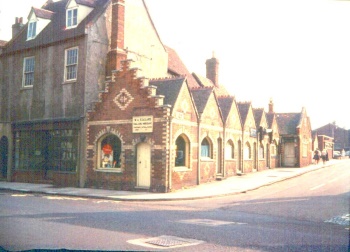 Market Shops with Happy Return
c1960 (Butwell)
Market Shops with Happy Return
c1960 (Butwell)Click Image
to Expand
In 1923, the Town Council proposed building “a public convenience (two W.C.s) for women, also a W.C. and lavatory for surveyor’s office[9] be erected on Mr. Hone's sheep market adjoining surveyor's office”. In 1924, the market had to be closed after a foot and mouth outbreak.[10]
It is not certain that the proposal succeeded since, in 1940, “Mr. F. H. Healing has offered at his expense to provide an air raid shelter in Barton Street. [But] it was suggested a shelter be built at Sheep Market, Station Street”.[11] This was built because the Town Council debated in 1946 that the “Station St ARP site considered for public conveniences of which a shortage in the town”.[12]

George Hone, had taken over Thomas’ Cattle Market in Oldbury Road by the time the 1883 O.S. Map had been published. By 1914 he had become Mayor, JP, County Councillor: a “well known and popular auctioneer”

Hone increased the stakes in 1927 by snapping up land vacated by the collapse of Thomas Walker and Sons in Spring Gardens where he built a modern, integrated cattle market, opened with great fanfare by the Conservative M.P., Sir Thomas Davies.

This ‘fat and store cattle market’ survived until 1967. It played an important part in the economy of Tewkesbury which, until well after World War II, was mainly that of a market town. Certain pubs like the Shakespeare and the Barrel, at 33 and 34 High Street respectively, were deemed to be a ‘middle class Market House’ which meant that it was within specified distance and thus allowed extended hours on the Wednesday live-stock market day. A ‘farmers ordinary’ was a three-course meal and one pub advertised “Beer sold by the Pound”.[13]

The Cascades Swimming pool, with money partly raised by the citizens of Tewkesbury, rose like the phoenix from the market’s ashes. The rest of the site was converted into Spring Gardens car park on which Tewkesbury’s twice weekly market is still held on Wednesdays and Saturdays - however, with no live meat for sale. 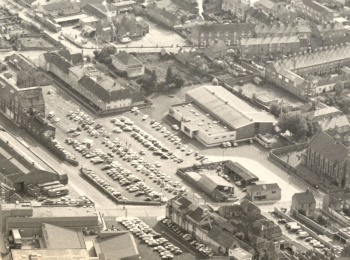 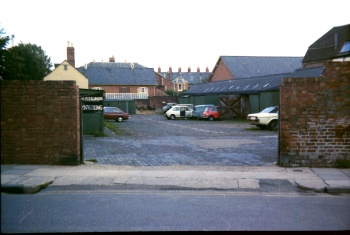 No Caption
Click Image to Expand
When Hone moved to the Walker’s site, he closed the Oldbury Road sale yard and Sweets, sensitive to the development of private car transport, won the support of the Town Council to erect wooden garages on the site, which were available for rent.[15] During an interview in 2003, the late Dennis Vickeridge claimed that B. Sweet & Sons also had “a Chapel Of Rest in the yard in Oldbury Road, now a small housing estate known as Hone Court. Before the housing development the yard contained lock-up garages (I rented one). Sweets owned the yard and as far as I am aware never stored coffins there - only bodies in the Chapel of Rest!”[16] 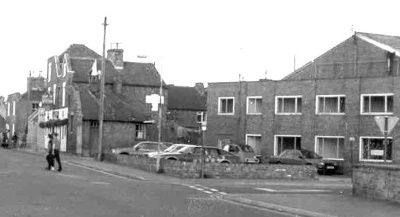 Warner’s Garage with Market House before 1987
Warner’s Garage with Market House before 1987Click Image
to Expand
The Station Street market also suffered from Hone’s competition and, in 1949, the Council gave its “approval in principle to Warner’s erecting a garage on ‘Old Cattle Market’ site”.[17] The Garage was a significant - if ugly - landmark that survived the redevelopment of the upper High Street area in the 1960s and 1970s. It was only demolished in 1987 to be devoted to yet another car park.[18] 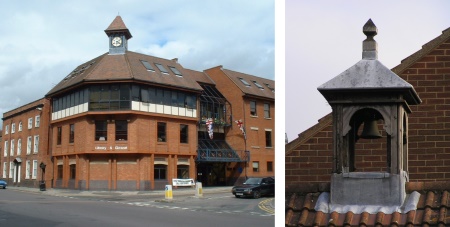 No Caption
Click Image to Expand
There is one interesting survivor which reminds of Tewkesbury’s importance as a live-stock market town. The office of Tewkesbury Cabs Taxi Company is the former “brick built office and rostrum” from which auctioneers and leading citizens, Thomas and Hone, plied their respectable and popular trade for so many years.
However, we must not despair of modern architects since two modern developments have incorporated the mark ‘Bell Tower’ motif in their design to remind us of the past: Bob Beswick’s Town Library and Hone Court, Oldbury Road.