There cannot be much about Tewkesbury's railways which John Dixon has failed to uncover for this wide-ranging work. It's not just a book about trains, locomotives and stations, for a strength of the book is that they are given a social context. I particularly enjoyed the chapter detailing the lives of some of the people associated with the railway across the years and the community they formed along the Ashchurch Road. John's inimitable style keeps the reader wanting to turn the next page to discover more about this episode of Tewkesbury's history which has left little trace on the ground since final closure over sixty years ago. If there is a criticism, many of the photographs could have been larger but then there wouldn't have been so many. The book is a worthy addition to the publications of the Tewkesbury Historical Society.

With generous use of personal testimony, old photographs, records and maps, John Dixon has assiduously pieced together the hitherto undocumented story of Tewkesbury’s two railways—the first in 1840 from Ashchurch to Tewkesbury Quay, connecting the River Severn with the new Bristol to Birmingham railway, and the second running from Ashchurch through Upton on Severn to Malvern from 1864. The author recovers the location and appearance of Tewkesbury’s distinguished neo-Gothic first station on the High Street, and well describes the inconvenience of a railway line which for decades crossed a busy High Street on the way to the Quay. The engineering challenges of the Mythe tunnel, railway company rivalries and local business optimism which spurred the establishment of the line to Malvern, illuminate familiar tropes of the Railway Age: indigenous enthusiasm for quicker passenger and freight connections to Birmingham and the South opposed by strong local resistance from vested interests, especially coaching inns and the occasional landowner.

After an initial boost to local industry—the maltings, Healing’s steam-powered flour mill, Ashchurch’s forage stores—resulting from the railway, Tewkesbury failed to expand as its railway-backers had anticipated. It was only absorption into the giant Midland Railway that brought the line some profitability. Road haulage after the First World War then began to attract freight away. Yet Tewkesbury’s railways had their moment in the sun during both World Wars, as the lines did sterling work carrying wounded soldiers to convalesce in Malvern; indeed, after D Day over 50,000 American casualties were borne from Southampton to the huge hospital on what is now the Three Counties Showground.

Nationalisation in 1948 saw the start of rationalisation of the country’s rail network, shutting down loss-making lines; the Upton to Malvern section closed as early as 1952. In a useful piece of revisionism, Dixon addresses the question of the responsibility of much-demonised Dr Beeching for the closure of the two Ashchurch lines. He concludes that the fate of the Ashchurch to Upton line (which closed in August 1961) was sealed before ever Beeching’s Commission set to work on its root and branch report of March 1963. In 1960 a passenger survey of the Ashchurch to Upton line illustrated just how few locals were supporting the line: often a mere handful travelled on the train.

Tewkesbury’s railways have found a scrupulous and enthusiastic historian, and his tale is capaciously illustrated. These two railways were never more than branch lines, though their history will be of interest to railway enthusiasts in the West Midlands for all that. Still, the text demands clear, legible maps—many are too small, and some are out of focus and as a result the lucidity of the story itself is occasionally compromised.

[Andrew Reekes is author of a number of books about Joseph Chamberlain and his family, and has just finished Worcester Moments, twenty episodes in Worcester’s history when the city was nationally significant. It is due for publication in November 2019. Since schooling in Worcester, he has known Tewkesbury well for over fifty years.] 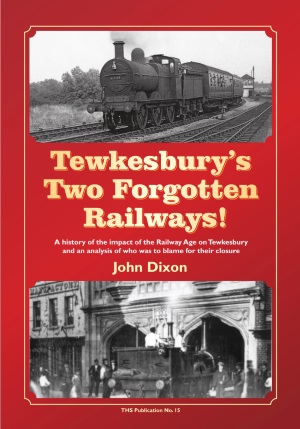 With the support of Tewkesbury Historical Society,  John Dixon has published his labour of love – Tewkesbury’s Two Forgotten Railways! It covers the history of our railway age from 1840 to 1961, looking at its impact on the town. It also tries to allocate responsibility for its closure – can we really blame Dr. Beeching? It features both the workers and the locomotives. The foreword was provided by Ian Boskett, and Sam Eedle designed the cover.

An illustrated talk on the railways was given by John on 13 November 2018, a book signing took place at Alison’s Bookshop on 17 November 2018 and there will be a guided walk along the Railway’s Remains on Sunday 18th from 11-1pm – starting at Morrisons with a charge of £2 in support of Parkinson’s UK.

We hope you will enjoy being reminded of our Railways. 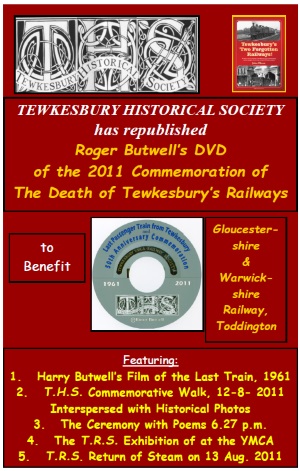 4. The TRS exhibition of at the YMCA;