A Visit to Forthampton Court 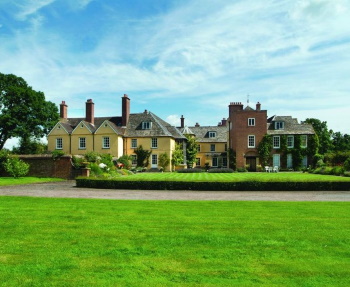 Forthampton Court[1], which in 1991 [2012] is still a family home, provides an excellent insight into the development of architecture as an outward symptom of the passage of time. Successive owners have imprinted on the house their own characters, but, it seems, used professionals to design and execute the changes.

The house we visited was completely remodelled in 1891 by John Reginald Yorke (then the local MP), who employed the talents of Philip Webb, also responsible for the restoration of Tewkesbury Abbey. He, together with William Morris, was a leading figure in the Arts and Crafts movement; the latter supplied a particularly fine carpet for the house. The artists found historic artefacts to inspire them.

[In 1991 we photographed a ‘Triptych’ but this has been moved out of the chapel: it is now screwed to the wall elsewhere. So Mr. Yorke has sent us a view of the 14th century panel-painting depicting St. Edward the Confessor, giving a ring to a pilgrim, the latter being St. John the Evangelist in disguise. This painting is thought to have been the personal property of the last Abbot of Tewkesbury and was found in the attics in the late 19th century. Editor 2012] 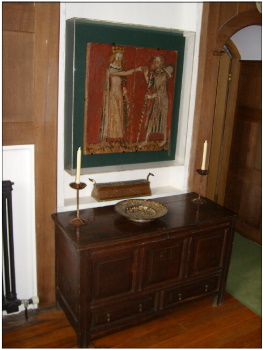 The Great Hall, where we were received in style by the present owner, Mr. John Yorke, was built in about 1540 for the use of the Abbot of Tewkesbury in entertaining his more worldly guests. Indeed one of the mysteries, which makes the property so fascinating for modern historians, concerns the burial of John Wakeman, the last Abbot and first ‘Anglican’ Bishop of Gloucester, following Henry VIII’s split from Rome. His bizarre tomb in the abbey, well known to tourists, is believed to be empty, and it is rumoured that he is buried at Forthampton Court. This has yet to be proven, though it is known that he continued to live at Forthampton after the Dissolution.

Forthampton Court came into the possession of the Yorke family as a result of a marriage between the families of wealthy bishops! In 1678 it was still in the hands of the Dowdeswell family, and, when Charles Dowdeswell died in 1716, he was described as being ‘late of Forthampton Court’. The property subsequently passed into the hands of Dr. Isaac Maddox, Bishop of Worcester, whose daughter, the Honourable Mary (1742?-l823), married the Honourable and Right Reverend James Yorke, Bishop of Ely and third son of Philip, first Earl of Hardwicke. It is Lady Mary Yorke whose avid letter writing has proved such a boon to modern historians of Tewkesbury.[2]

Mr. John Yorke is clearly proud of the individualistic nature of many of the members of his family. His great-grandfather, John Reginald Yorke, MP, was an enthusiastic follower of the current advances in Science, and the family still possesses the first edition of ‘Faraday’s Experiments in Electricity’, the seminal work in this newly discovered field. He was also a keen amateur photographer, taking photographs of local views which he developed himself. His son Vincent was a classical scholar in his own right, and held the position of Secretary to the British School of Athens for over half a century. However, the survival of the family as landowners is possibly due to the success with which he managed to combine such cultural interests with active business pursuits. He was a director of the National Westminster Bank, and also chairman of the Mexican National Railway network.

Vincent Yorke was the father of Gerald, who was a friend of Alistair Crowley, ‘scholar of the occult’, in the 1920s, and there are reports of visits to the house paid by such modern eccentrics as Mick Jagger and Marianne Faithfull, both in search of esoteric knowledge.

Vincent was also the father of Henry Yorke, who was, as he reveals with masterly understatement on his tombstone, ‘the novelist Henry Green’. Our guide John Yorke combines life in the West End as director of a large firm of London Antique Dealers with that of a country gentleman, but he has a brother, Vincent, who is a portrait painter living in Bushley. It is a sign of the end of the Cold War that John Yorke can also boast that he is a distant relation of Kim Philby, the English intelligence officer who defected to Russia and became a Major-General of the once-feared KGB! 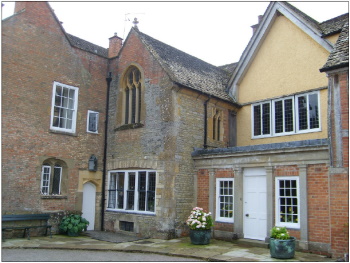 One would not be disappointed, therefore, that such individualism was reflected in the Court’s treasured possessions – and losses. Apparently the family once inherited by marriage four Turner watercolours, but three of them were exchanged for a three-quarter share in a racehorse, called ‘The White Knight’ and winner of the Ascot Gold Cup, the hoof of which has been preserved in the library! It is a sign of another change in attitude that John Yorke is less proud of his grandfather, Vincent Yorke, who excavated a marble Periclean head from an archaeological dig in Greece, and then smuggled it out of the country under a bowler hat. Members of the Society were also amused to note that the family takes a balanced view of contemporary politics of 1991 by displaying in the library the ‘spitting images’ of both Mrs. Thatcher and Mr. Kinnock!

Undoubtedly, one of the family’s prized possessions is a painting dating from about 1350, apparently one of only eight which survive painted on board. Rediscovered in the nineteenth century, it depicts Edward the Confessor giving a ring to a pilgrim. It now hangs in the private chapel in the house and, together with some important treasures from Tewkesbury Abbey, was lent to the ‘Age of Chivalry’ exhibition at the Royal Academy in 1989.

What particularly fascinated me, however, was the small collection of Chinese ‘Export’ porcelain, dated about 1740. As a harbinger of modern practices, the design, usually incorporating the clients’ coat of arms, was apparently shipped to China, where the porcelain was produced by cheaper labour and re-exported to Britain.

Other items of great interest to the group were bedrooms designed in the nineteenth century, in one of which was a painting by Dame Laura Knight, the English Impressionist, and in another an important late Victorian oil painting, The Zephyrs, by J.W. Waterhouse, purchased by Mr. John Yorke’s great-grandfather from the Royal Academy when it was first exhibited.

Although it is clear that the 1891 restoration was a profound undertaking, developments continue. The medieval Great Hall was restored to its full height in the Edwardian period, and a great oriel window in the manner of Lutyens was added. During the First World War the house was used as a hospital for convalescing officers. We were also informed that the car park, which was put at our disposal, was once the site of servants’ quarters which were demolished in 1957.

Many country houses are now accessible to the general public – at a price. We in Tewkesbury may feel disappointed that one of our few ‘great houses’ is not open to the public. However, because the family has managed to preserve and develop it without exposing it to the ‘tourist industry’, it provided an excellent opportunity for members of the Society to visit a local monument which has witnessed and reflected changes in our society over the past millennium. We very much appreciated the warm hospitality, and subsequent assistance, of Mr. Yorke.