The Fletchers and Fletcher’s Alley 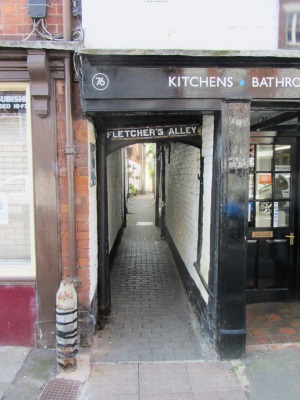 In 1924, Mrs Sarah Ann Fletcher died in the workhouse. She was 102 years old and blind, but despite this she was a celebrated citizen and retained her memory to the last. She was the last link to events like Queen Victoria’s coronation. She was the widow of Richard Fletcher, Gunsmith and bell hanger. They were of a dynasty of Fletcher gunsmiths, who had two shops in Tewkesbury as well as gunsmiths in Worcester and Gloucester.

Her husband died young. He was Captain of the Fire Brigade and was very badly injured in 1872 when a barrel of paraffin exploded in the basement of Turner and Yorke’s Ironmongers in the High Street. His business and all his property, in Fletcher’s Alley and elsewhere, was sold up in 1875.

Fletcher’s Alley is maybe one of the least changed alleys in Tewkesbury. The repaving fifty years ago when blue bricks were replaced with concrete paviours caused such an outcry that it’s never been done since. In the nineteenth century, there were ten cottages in the alley. In recent years, two cottages have been converted to one.

In common with the rest of the town, living conditions came under the scrutiny of the Council, but when a clearance order was published in 1938, and later confirmed, it was confined to just two cottages, Numbers 5 and 6, together with a WC, wash-house and shed. Mrs Jones, the owner, objected on the basis that the tenants had been there for 40 or 50 years and also she’d already lost 25 or 30 properties to clearance orders, which was affecting her income. Despite this, the demolitions were confirmed and went ahead. In 2003 new cottages were built in their place. Designed locally, they fit beautifully into the alley-scape.

As in other alleys, water quality was a continuing problem. After many attempts to improve it, an order was finally issued in 1899 to pipe the public supply in. The two landlords involved agreed to foot the bill for their tenants, but both asked to retain their wells and pumps for their own houses. One, Mr Watson, was a baker with his shop in the alley front house. There’s no record of anyone coming to harm from his products! 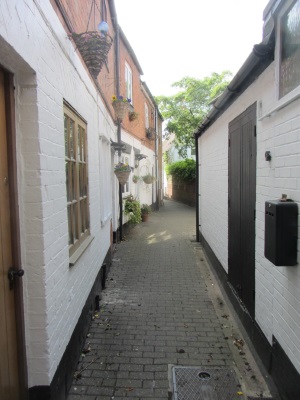 Compared with many, Fletcher’s alley has had a quiet and peaceful existence. There have been deaths and injuries in wartime and with a river at the foot of the alley the tragic drowning of small children was unfortunately inevitable. There have been occasional misdemeanours. In 1880, Jane Fletcher and Mary Rylandsued each other over an altercation in the alley; in 1909, William Sweet was fined and bound over for beating his wife; in 1927 George Booth, 13, was found guilty of pulling the feathers out of pigeon’s tails. He was discharged on condition that his father suitably punished him. Frank Birch was taken to the courts by the Council in 1941 because he refused to purchase the standard style of dustbin.

The most excitement, though, was in 1856, when William Day and others forcibly entered ‘certain tenements’ in Fletcher’s Alley. They had belonged to John Prichard, who predeceased his wife. She left them in her will to Mrs Fryzer. William Day’s claim was that they should have passed to him, and rather than using the legal route he hired some ‘muscle’ and took possession. He, in turn, was evicted by Mrs Fryzer’s brother, and possession continued to go back and forth. Eventually, the courts took control and condemned the violent possession of the property. Satisfied with confirmation of her ownership, Mrs Fryzer didn’t pursue damages. It must have been a worrying time for the poor tenants!

Today, though, the alley is quiet, peaceful and a pleasant walkway between Barton Street and Swilgate Road.