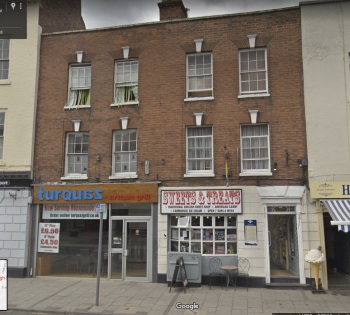 The Documents and papers within this accession number show that these houses were originally part of an estate of William Ridler and his wife.

The estate seemed to have been mortgaged with the mortgage being assigned at various times to different people:- William Sloper / William Arnold / John Sturmy

Laurence Cox paid John Sturmy £15-18s-0d in the other part discharge of the mortgage.  The estate was then placed in the hands of Charles Bick of Tredington and William.  Attwood of Stoke Orchard as trustees until the fee simple rightfully belonged to Chjarles Mason

In 1750 there is now £175 owing and the executors of Mrs Hester Mann require the money to settle her estate so Thomas Mason sells the 2 houses north of “The Anchor” to Robert Smith [the tenant of one of them] – for £220 and pays £175 to the executors The two houses north of “The Anchor” [modern day Nos. 43 and 44 High Street] become the property of Robert Smith Whitesmith.

In 1793 Robert Smith dies having made a Will - leaving the two houses in High Street “now in my own possession and in occupation of [blank] Wilkins widow” - to Robert Smith, the son of his nephew William Smith

By 1858 Joseph Smith and Maria his wife were obviously in difficulties being overdrawn at the Gloucestershire Banking Co. and it was passed over to the Trustees of the Banking Co.

In 1858 The 2 houses are put up for sale – described as nearly opposite Railway Station in occupation of William Gibbs and James Turner with “The Anchor” on the south side and Messuage of Thomas Alexander Johns on north side. The Highest Bidder was William Grizzell of Kemerton who purchased the properties for £695 – which was passed to Benjamin Perks Procter in part discharge of the mortgage.

In 1873 William Grizzell and in his Will appointed Philemon Land of Tewkesbury ironmonger and James Roberts of Kemerton gent as executors.

In 1875 the property was put up for sale again – this time in 2 separate Lots.

[These documents, currently in Tewkesbury Museum, will be handed to the Gloucester Archive]