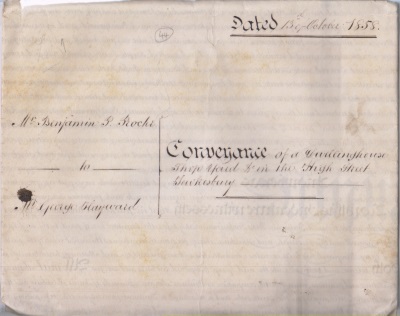 This Indenture dated 13th October 1858 and made between:

Whereas by Indenture dated 12th September 1848 made between: 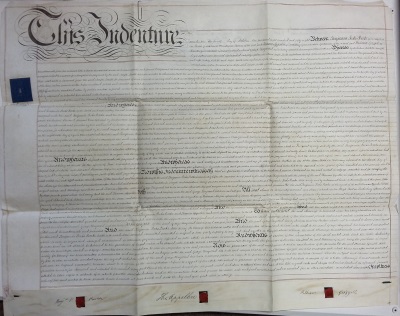 After reciting that said Joseph Smith was seized in fee of the Messuage and Lands Hereditaments and Premises thereinafter described and intended to be released and in consideration of £1000 the said Joseph smith granted released and confirmed and said Maria his wife with the intent to release the said Messuage and Hereditaments free from her incroate? Title to dower did remise and release unto the said Samuel Ellis Garrard his heirs and assigns (amongst other hereditaments) – the messuage and premises hereinafter described and assured

In default Samuel Ellis Garrard could, after giving 6 months’ notice, sell the premises

And Whereas by Indenture dated 18th October 1857 made between:

And Whereas default was made

A Messuage or Tenement formerly belonging to Thomas Woollams and now of George Smith bell hanger on South
Messuage or Tenement formerly in the occupation of William Brooking but now of Henry Sheppard on North
Extending from the High Street on the front part to a passage leading from Smiths Lane at the back part thereof
Together with all the buildings, ways, passages etc
And the Reversion and Reversions
And the Remainder and the Remainders and all rents issues and profits
And all estate right and title absolutely discharged from the mortgage debt of £1000 and interest and all claims, demands in respect of these unto said George Hayward
To hold to use of George Hayward forever
Covenant by George Hayward the wife not entitles to Dower
Covenant by Benjamin Perks Procter that he had not encumbered the premises